Posted on December 8, 2010 by Simon Richardson 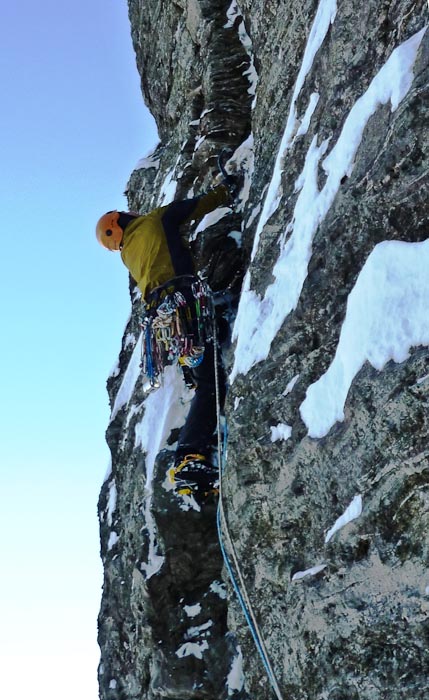 Guy Robertson at the start of the difficulties on the crucial third pitch of Mammoth (IX,9) on The Brack in Arrochar. Greg Boswell likened the two crux overhanging crack sections to the route Fission, an M10 he flashed in Norway. (Photo Guy Robertson Collection)

Yesterday (December 7), Guy Robertson and Greg Boswell pulled off the biggest new route of the season so far, with the first winter ascent of Mammoth, a rarely climbed E3 on the imposing front face of The Brack in Arrochar.

“We were totally stoked to nail it on-sight,” Guy explained. “We led through with me leading the first pitch. I took a fall a couple of feet off the deck, then dispatched it, with Greg leading the summer crux and myself an amazing-looking overhanging crack festooned with turf to the left of the summer line on pitch three.” On pitch four, the turfy crack continued rightwards back into the summer line about ten metres or so below the top.

The result was three pitches of 9, the middle two very sustained and strenuous, and a final pitch of 7, again very sustained. “Despite fail-safe protection all the way, we’ve settled on a grade of soft IX,9,” Guy concluded.  “Whatever the grade, it’s probably the best short, hard, accessible and well-protected route I’ve climbed in Scotland – an absolute stunner!”

Simon Richardson is a passionate Scottish winter climber
View all posts by Simon Richardson →
This entry was posted in New Routes and tagged Greg Boswell, Guy Robertson, The Brack. Bookmark the permalink.