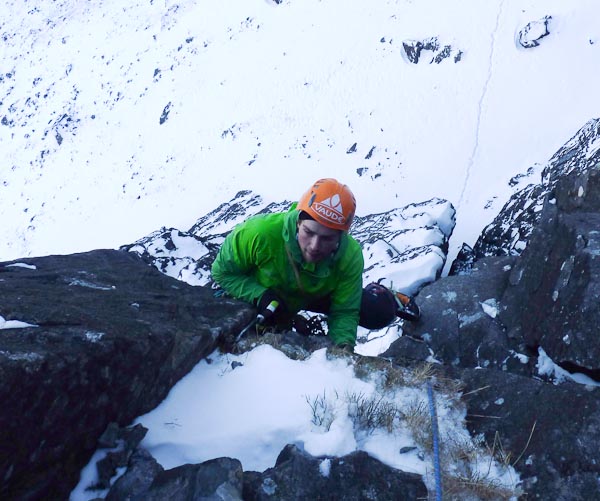 Greg Boswell on the first winter ascent of the Black Cleft (VI,7) on Sgurr Mhic Choinnich on Skye. Guy Robertson commented afterwards that this traditional looking climb gave a tremendous outing and was quite technical in places. (Photo Greg Boswell Collection)

Last Thursday (December 2), Guy Robertson and Greg Boswell made the first winter ascent of the Black Cleft on Skye. This well known winter objective lies on Bealach Buttress on Sgurr Mhic Choinnich in the Cuillin and gave a three star outing at solid VI,7.

“We felt very privileged to climb such a fine route in such an outstanding coire, and so early in the season as well,” Guy told me. “Descending from Coire Lagan in the last moments of daylight, the sun setting over a snow-clad Isle of Rum, with a storm brewing over the Outer Hebrides, forming an angry backdrop to the cobalt sea, was amazing!”