Posted on February 4, 2011 by Simon Richardson 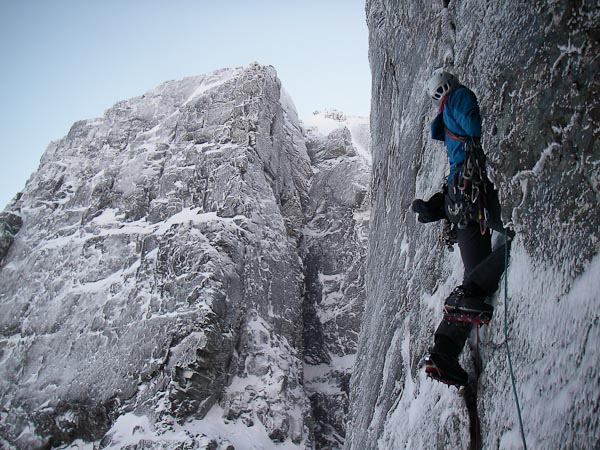 Tim Neill making the second ascent of Storm Trooper (VIII,8) on Creag Coire na Ciste, Ben Nevis. The upper right side of Number Three Gully Buttress can be seen in the background, and the lines of Gargoyle Wall, Babylon and Winter Chimney can be clearly picked out. (Photo Keith Ball)

“We climbed via the original first pitch – the one with Steve Ashworth pictured on it in the Ben Nevis history book,” Tim told me. “The direct pitch at the bottom [as climbed on the first ascent] looked a bit spicy. Overall, we thought the route was brilliant!”

The impressive line of Storm Trooper, which takes the wall and narrow tapering ramp right of Darth Vader on Creag Coire na Ciste, was first climbed by Andy Turner and Steve Ashworth in January 2008. They spotted the line when they were climbing The Secret in December 2007, and attempted it the very next day. Not surprisingly, after their exertions on The Secret, they felt a little tired, and retreated after climbing the first pitch. They returned the following month, and this time Turner took a more direct line up a shallow groove to gain the ramp, which turned out to be harder and less well protected than the original way. Following the intense grading debate after the ascent of The Secret, they rated the climb VIII,8, but the route may be towards the upper end of its grade.

With the nearby Sioux Wall now seeing ascents almost every weekend, it is great to see another Grade VIII mixed route on the mountain being climbed. Hopefully Tim and Keith’s repeat will prompt other teams to venture on to the several dozen other new Grade VIIIs added to Ben Nevis in recent years.