New Line on An Teallach 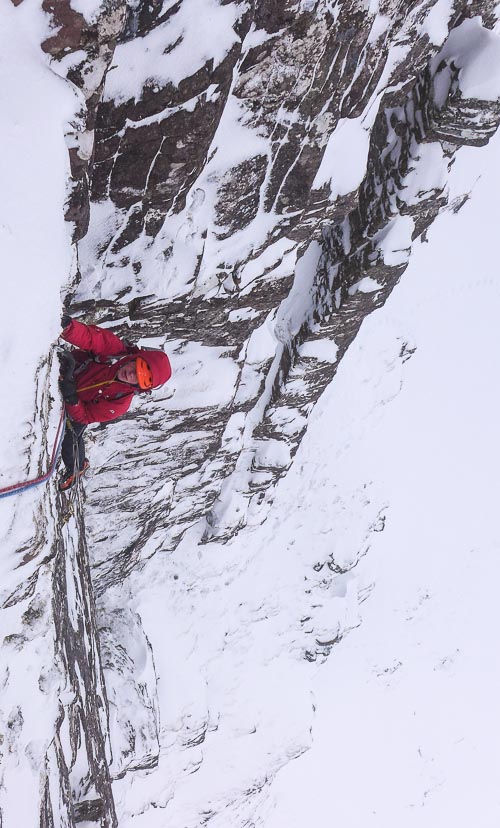 Uisdean Hawthorn on the first ascent of Low Riders (VII,8) on Glas Tholl on An Teallach. The route follows a prominent line of corners on the impressive lower part of Minor Rib. The chimney line in the background is the Flake Chimney Variation to Minor Rib (V,5) that was first climbed in 2009. (Photo Guy Robertson)

Guy Robertson and Uisdean Hawthorn visited An Teallach on February 25. “We thought we’d struck gold,” Guy told me. “With what looked like perfect conditions it was a pretty easy walk up into Glas Tholl. However we were soon put in our place by almost un-climbable snow/graupel on the approach to routes higher up.

We tried to get up into The Alley for a look at the Last Orders area, but ground to a halt in the face of possible death by avalanche. Then we went round to try Hayfork Gully but saw that Wailing Wall was black! Third time lucky, and we settled for a strong line of corners and grooves just left of the right edge of Minor Rib. This gave us two long and sustained pitches of VII in a great position up to a junction with the original route on this buttress. Great to see young Uisdean stepping away from the simple pleasures of cruising up sticky ice to do some awkward, pokey scratching around on snowy north west sandstone!”

Simon Richardson is a passionate Scottish winter climber
View all posts by Simon Richardson →
This entry was posted in New Routes and tagged An Teallach, Guy Robertson, Uisdean Hawthorn. Bookmark the permalink.