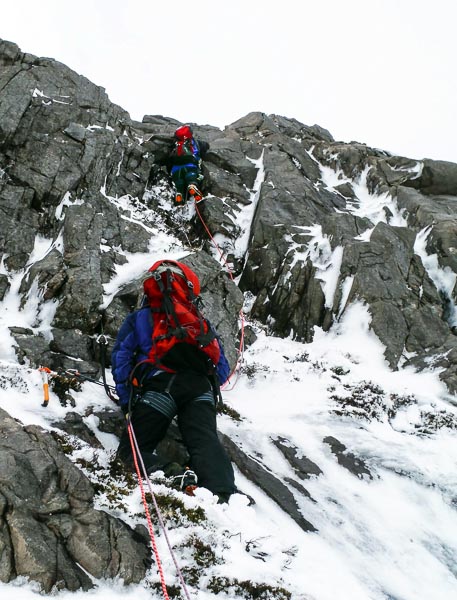 Andy Nisbet below the chockstone on the first pitch of Barbie, a new V,6 on Beinn Liath Mhor in the Northern Highlands. This south-facing cliff has proved to be a good venue for middle grade mixed routes this season. (Photo Sandy Allan)

“Beinn Liath Mhor has been a happy hunting ground for Sandy Allan and I this year,” Andy Nisbet writes. “We were joined by Steve Perry this time (February 25). It is a good accessible place when snow is deep but cold enough for the south-facing cliff to be frozen. So with similar conditions anticipated, where else is there to go?

The best remaining line was going to be harder than the previous ones but now later in the season, we ought to be climbing well. Looking at my picture of the crag, I could see the summer route Doll Restoration, a slabby V Diff up a rib. It was too clean to be a good winter line, but it had a chimney to its right and leading into a turfy crack-line. This led to overhangs but assuming we could traverse left across the rib, there looked to be white corners (it was a winter picture), and this was always a better sign than bare rock.

The walking conditions weren’t as bad as last time, although we still lost the path, but at least we knew where we were trying to go and the photo kept us right. The initial chimney looked easy on the photo and capped by a chockstone, but I did wonder why we’d walked past it last time and not noted it as a possibility. But I didn’t think it looked too bad when we got there, although the others were happy with my offer to lead it. I think they were more concerned with the chockstone being loose, which would have been bad news, whereas I was happy that it was big enough to be solid. Although I did have slight worries when the pitch turned out to be only partially frozen, quite steep and runners hard to find. Digging out a peg placement helped the latter and a thin move meant total commitment to the chockstone. Getting on top of it meant a lot of struggling, partly not wanting to pull too much on it but mostly due to the usual tangle with leashes. Once on top, I felt it move but then I realised that there was a small loose block sitting on top of it and the main chockstone was solid. The others both went through the same worry when seconding.

Crossing the rib turned out to be easy and I belayed on it. Sandy then led up into the white corner on the left, announcing that it was full of turf but again turning out to be quite steep and a little insecure. The route was turning out to be much more sustained than expected, as Steve led a pitch up the crest to below a steep tier. He suggested I tried a well-defined corner on the left, and it turned out to be fully frozen with helpful cracks and we agreed, the best pitch on the route. But still it wasn’t over, leaving Sandy with a steep crack-line to finish, short but perhaps the technical crux.

That left a lot of increasingly easy ground, turning into walking up to the summit crest. The weather was deteriorating as predicted but the descent was easy on now damp snow and we were down in the corrie before the rain started. The summer route by Steve Kennedy and Cynthia Grindley was called Doll Restoration, but I don’t know whether this was some sinister Voodoo name or that Cynthia hadn’t climbed for a while. We called our route Barbie, not a reference to Cynthia, and grade V,6.”