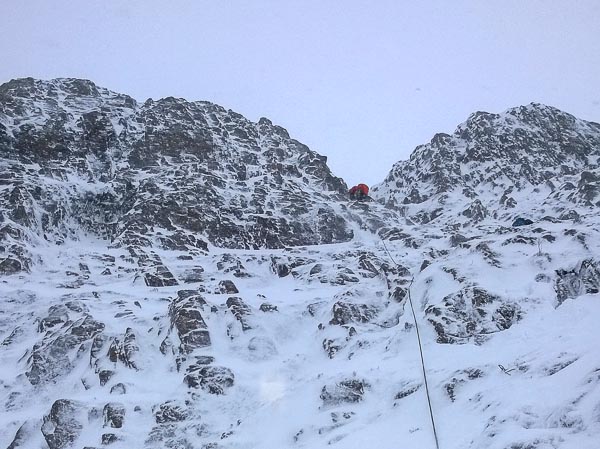 Dave Burke on the first ascent of Twoburkelosis (III,4) on the Upper West Face of Gearr Aonach in Glen Coe. This easily accessible 75m-high wall contains five routes including Rescue Team Gully (II/III) first climbed by Hamish MacInnes and party in 1966. The cliff can be seen high up on the left during the approach to Stob Coire nan Locan and lies opposite the Far Eastern Buttress on Aonach Dubh. (Photo Colm Burke)

On February 23, Colm and Dave Burke climbed a new route on the Upper West Face of Gearr Aonach. The cleverly-named Twoburkelosis takes a groove just inside the left edge of Jim’s Gully, and ably demonstrates that considerable potential remains for new routes in the Scottish mountains at all levels of difficulty.

“It was cracking fun at about III 4,” Colm told me. “It was about 75m to the top with a good full pitch of mixed onto easy ground and then the top out. Overall, it was a nice little route. The forecast was poor and it was a good option in those conditions.”