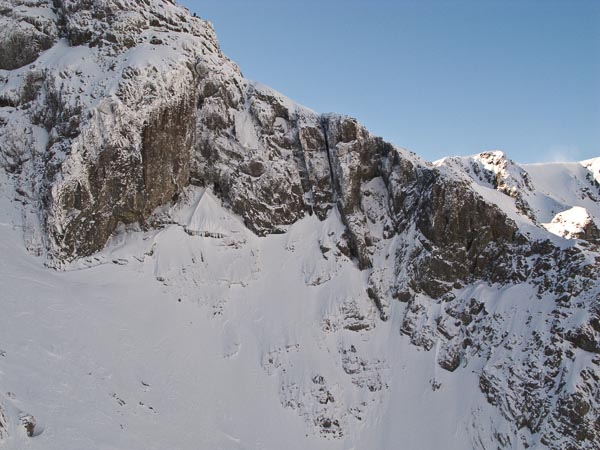 Red Dragon (VIII,9) on the East Face of Tower Ridge on Ben Nevis takes a line up the right side of the wall with the snow patch left of the deep gash in the centre of the photo. The deep gash is The Great Chimney (V,6) that was first climbed in winter by Jimmy Marshall and Robin Smith during their famous week in February 1960 when they climbed six new routes culminating in the first ascent of Orion Direct. (Archive Photo Simon Richardson)

On February 26 Helen Rennard and Dave MacLeod added a new mixed test-piece to the Ben. Helen takes up the story:

“Dave and I headed into the Ben. We didn’t have a definite plan and it was more a case of getting to the hut and having a look. Dave fell through a snow bridge on the walk-in and was up to his knees in snowmelt (my helpful response when this happened was to stand and swear!), so the planned cup of tea at the CIC turned into probably two hours by the fire trying to dry boots, chatting to folk, including Blair Fyffe and friends on their way to do the avalanche forecast, and listening to the wind batter the side of the hut.

Back in December Dave Garry and I had unsuccessfully tried a new line on the steep wall right of Brass Monkey, about ten metres left of Urchin. The bottom six – seven metres of this was steep and pumpy, especially as it was straight off the belay, and Dave Garry reckoned the route could be grade IX (the harder climbing was still to come). I suggested this as an option to Dave, as we would be sheltered from the strong westerly winds round in Observatory Gully. Dave was up for it, Dave Garry texted ‘go for it’ (I’d checked he was ok with this), Dave was happy to lead it, so that was the plan. The weather had deteriorated by the time we left the hut, with spindrift being blasted up the gully, and we met a number of climbers retreating as we headed up. Thankfully we were fairly sheltered round at our route for at least half the day.

The first pitch was the crux, with a steep tech VIII section at the very bottom and a strenuous overhanging tech IX section above this with nothing much for your feet on the left. The cracks were iced up and the gear was poor, and Dave spent a long time trying to find some semi-decent runners before powering on through the crux. He did shout down from 20 metres up that his last decent bit of gear was the in-situ sling (left by me and Dave Garry) about five metres above the belay! By mid afternoon the weather had become more stormy and there was now no shelter from the updrafts of spindrift. Seconding for me involved a tight rope and a lot of cursing myself for not having trained a bit harder over the past month as my arms started to give up, but I did make it… From there it was grade V then easier ground to the top and a descent down Tower Ridge. After more tea at the hut we walked down in grim weather – the first time I have ever had to wear goggles to get back to the deer fence!

We decided to call the route Red Dragon after the little red dragon who was found in Observatory Gully in summer 2013 by Blair and Tony Stone and who has been living in the CIC ever since. We wondered about IX,9 for the grade but Dave thought VIII more accurate as without ice in the cracks you would be able to place cams under the crux.”