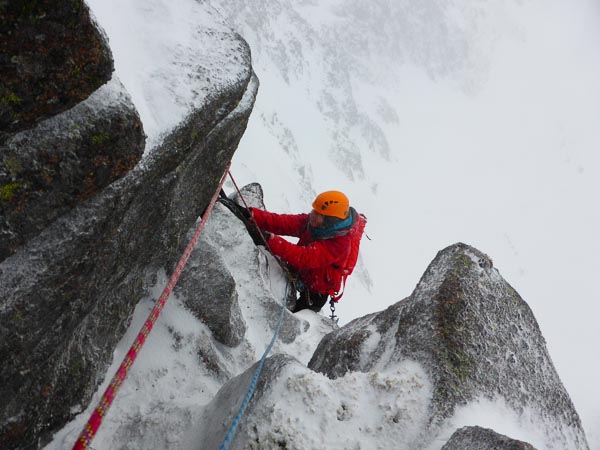 Fiona Murray on the finishing moves of Jail House Rock in Coire an t-Sneachda. The top pitch of this summer E2 makes a fine direct finish to Houdini, a three star VI,7 on Fiacaill Buttress in the Northern Corries. (Photo Rob Adam)

On February 28 Rob Adam and Fiona Murray climbed a new finish to Houdini on Fiacaill Buttress in Coire an t-Sneachda.

“After straying off route on pitch four of Houdini,” Rob explained, “we found ourselves at the right-hand end of the final headwall, where Fiacaill Buttress and Smokestack Lightnin’ drop down left. Instead of heading down to the Houdini finish (also down and left) we decided to tackle the headwall, taken by the top pitch of the summer route Jail House Rock (E2). The next 10m gave steep pumpy climbing, with good protection, and deposits you on the very top of the buttress next to a convenient thread belay.

Having climbed Smokestack Lightnin’ in December we agreed that this finish would be more in keeping with the rest of that route, providing an exciting crux finish and straightening it out (Smokestack joins the wandering Fiacaill Buttress for the last two pitches), or as we did it on the day, and entertaining indirect finish to Houdini! This would keep Houdini and Smokestack completely independent, as they currently cross on the top pitch, and add another pitch of harder climbing.

As for the grade for this pitch, we’ve guessed at VI,8 (having never climbed Tech 8 before Saturday, but finding it harder than 7’s done to date and similar in difficulty to Watch Out, which we did yesterday).”