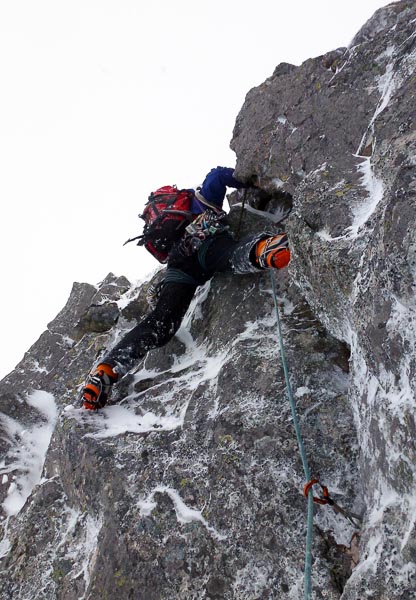 Steve Perry on the crux of Waive Wall (V,7) in Coire Garbhlach. This secluded corrie on the south-west side of the Cairngorms massif is seldom visited by winter climbers. (Photo Andy Nisbet)

“Coire Garbhlach is a useful place when the Cairngorm ski road is shut, although it does mean I’ve usually climbed there in bad weather,” Andy Nisbet writes. But on March 2, the weather didn’t seem too bad, although there was obviously a lot of snow high up. The corrie has never really caught on for climbers, and I always wonder why until I have to approach through deep heather and then struggle up the rough and bouldery valley base. The rough part (garbh) refers to the water, and any sections of path were washed away during a thunderstorm in the 1990s. But if you can put up with two and a half hours of approach to the upper corrie, then you’ll get seclusion and for Steve Perry and me, that means a new route.

This was the last of the lines I knew (isn’t it always!), on the left side of the lowest buttress, left of the Grade I called Curving Gully. But as seems to happen there, it turned out to be steeper and therefore better than I’d expected. The only snag was that the approach up the valley must have been sheltered because the route most certainly wasn’t and even gearing up took ages.

But conditions were great, with the turf well frozen and even some ice at the base. We soloed up towards a steep band with the hope that there was a way through it, and despite going one step beyond Steve’s comfort zone (he had the rope), I belayed below an overhanging flake-crack. It looked well beyond my comfort zone, but despite various suggestions for possible alternative lines, he was happy to give it a go.

Steve’s ability to progress cautiously and place gear on very steep ground is impressive, and was true here too. Clearing snow in the back of the crack produced several wedged blocks with brilliant placements (assuming they stayed in) and some commitment gained a final capping chockstone. I think he was about to pull over happily when I suggested he threaded it, but he did so and kept the belayer happy. Round about this time, someone appeared on the plateau above and watched us for a short while. I presumed it was just chance he had spotted us, but later we found footsteps which seemed to have come up Curving Gully (no one else ever comes here!), and I guess he’d heard us.

I persuaded Steve to stop, largely so he could hear if I needed a tight rope, plus we were climbing on a half rope with plenty of potential stretch. But in the end I managed it OK, and even got a fine final crest to the top. The weather wasn’t too bad on top and the descent is easy down the track which leads up to the Munro Mullach Clach a’ Bhlair. There was even a team coming up rather late in the day. The route was called Waive Wall, Grade V,7.”