The Shroud, The Secret and More 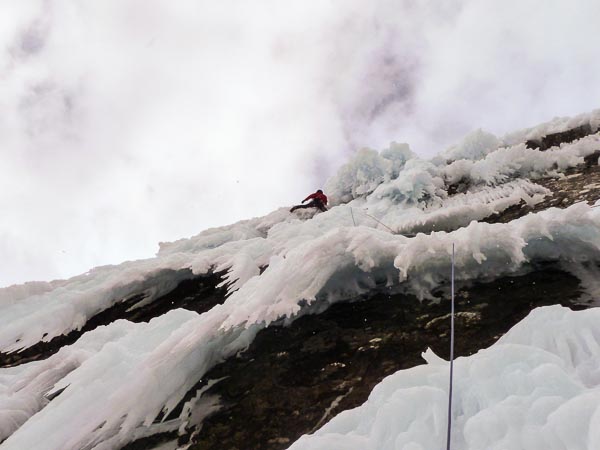 Pete Harrison powering up the Right Pillar of The Shroud (VI,6) on the North Wall of Carn Dearg on Ben Nevis. This steep continental-looking ice route has been in the best condition in living memory and has seen several dozen ascents this season. (Photo Tom Livingstone)

Following his successful Scottish hit in January, Tom Livingstone had another superb run of routes in February. Tom takes up the story:

“Pete Harrison and I were keen for two weeks of hard mixed climbing, ideally in the North West Highlands: Beinn Eighe, Beinn Bhan etc. But Scotland always seems to have other ideas! The ice was in fantastic condition but the mixed wasn’t, or plastered in cruddy ice. We had to face reality, so racked the ice screws.

We enjoyed the classic ice routes (or rather, Pete did and I behaved like a spoilt child and complained about the lack of mixed. Thankfully I got a kicking and even started to enjoy the ice!). Over a couple of days we did Minus Two Gully (after an attempt at Minus One), Mega Route X (after an attempt at Sioux Wall), soloed The Curtain and climbed both Left and Right pillars of The Shroud.

Apparently, these routes were all in ‘once-in-a-decade’ condition, which has made me appreciate the experiences a lot more. We kept saying, ‘this isn’t Scotland!’ when lowering off a brilliant two-pitch ice route, or sinking another ice screw to the hilt. The left, free-hanging ice pillar of The Shroud was particularly exciting.

At last, we managed to get our fix with the mixed. Heidbanger (VIII,8) came into condition and we got stuck in, eager for some steepness at last. Pete led the first pitch – an overhanging and technical corner into an offwidth. I had delicate and technical face climbing for pitch two. It was cool to swing into a hanging ice smear at the top of the face with a small but tasty run-out below! We rapped down Mega Route X just before darkness, appetites sated after a thoroughly enjoyable route. I think this was the third ascent, interestingly. There’s a cool video of Greg Boswell climbing it on the BMC TV site.

Pete returned to Wales and Simon Frost came up the following day – perfect timing. We found ourselves beneath Babylon (VII,8) on Ben Nevis, and Si kindly let me have the crux pitch.

The next day, we waded through deep snow to Coire na Ciste. The crag was plastered and we had pretty stormy conditions, but The Secret (VIII,9) was white and I was on a mission. Simon led the first pitch – a tricky pitch in its own right – which got me thoroughly warmed up. We had some issues wondering where to belay, but eventually I set off… only to be stopped two metres up the wall by the crux. After several up-down-up-downs, testing a cam and drowning in waves of spindrift, I considered sacking the whole thing off. It was heavily iced and the wind was really buffeting me – not ideal on technical, tenuous moves!

I got back on, however, and scraped through the lower moves using small hooks and deep lock-offs. Before I knew it, I was committed and gunning for the ‘two-thirds’ ledge. It probably took me a while to make each move but it felt like the route flew by, skipping my feet up the wall on matchbox edges.

The final headwall cracks were really cool to climb but I was very conscious of completing the route. To fail right near the top, ‘Cracking Up’ style (a grade IX,9 by Nick Bullock, on Clogwyn Du, North Wales where I recently snatched defeat from the jaws of victory), would have made me really pissed! So, with Ueli in mind I carefully pulled onto the snow slope above and whooped with relief.

Thanks to Pete and Simon for a great few weeks.”