Posted on February 8, 2015 by Simon Richardson 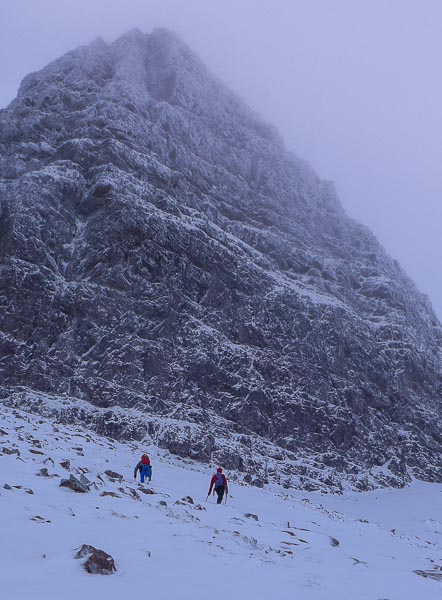 Greg Boswell and Uisdean Hawthorn approaching the Giant’s Wall on Beinn Bhan. The Messiah (X,10) rakes the big roofed corner on the left side of the face before continuing up the groove inset into the arête on the upper wall. The upper section of the route had been previously climbed by Guy Robertson and Dave Macleod after starting up Gully of the Gods. The clean-cut corner further right is taken by the upper pitches of The Godfather. (Photo Guy Robertson)

Guy Robertson, Greg Boswell and Uisdean Hawthorn pulled off a long sought after dream by making the first winter ascent of The Messiah on February 2. This legendary route was first climbed by Creag Dhu climbers George Shields and Bob Jarvie in summer 1972 after a number of attempts. It was not recorded at the time, and passed into Creag Dhu folklore, but a topo was eventually published on the Internet in 2013 on the Footless Crow website. Prior to this (following Guy Robertson and Pete Benson’s ascent of The God Delusion), Norrie Muir had sent a copy of the topo to Guy who then made it the next big objective on the wall.

The story of the first winter ascent of The Messiah is Guy, Greg and Uisdean’s to tell, and Guy and Greg have written excellent accounts on their blogs. Needless to say the eight-pitch route fully lived up to expectation and was graded X,10 and both Greg and Guy had to pull big Tech 10 leads out of the bag.

“The route doesn’t compare with anything I’ve done before,” Greg told me. “It is such a strong line, and the fact that it was home to some very hard and fun climbing was just the icing on the cake! It was cool to venture onto new [winter] ground not knowing which would be the hard pitches, or even if the big roof would be climbable in winter. Thankfully it was the perfect combination of difficulty there was just the right amount of weakness to forge our way through! What more could you ask for? Maybe I’d ask for it to be a little less scary, but that’s all part of the game, right?”

For Guy and Greg, the first winter ascent of The Messiah completed a remarkable hat trick of new routes. Within the space of 15 days they have made first ascents of three new Grade X’s – The Greatest Show on Earth, Range War and The Messiah. This is an unprecedented run of high standard Scottish winter climbng, so I couldn’t resist asking Greg for his reaction.

“We didn’t intend to go out and climb three new Grade X’s in succession,” Greg explained. “It just happened to be that we’ve been waiting for these routes to come into condition for the past few seasons, and with the stormy weather this winter, they have all come into perfect condition. So we grabbed them while they were hot. This also happened at a time when Guy and I both were at the peak of our fitness from an earlier extended period of training due to bad weather conditions. But yeah, it was more than I could have wanted; all the training and route planning paid off with three big routes, and to have them be three hard routes is the perfect scenario. Scottish winter at its best!”