Posted on February 9, 2015 by Simon Richardson 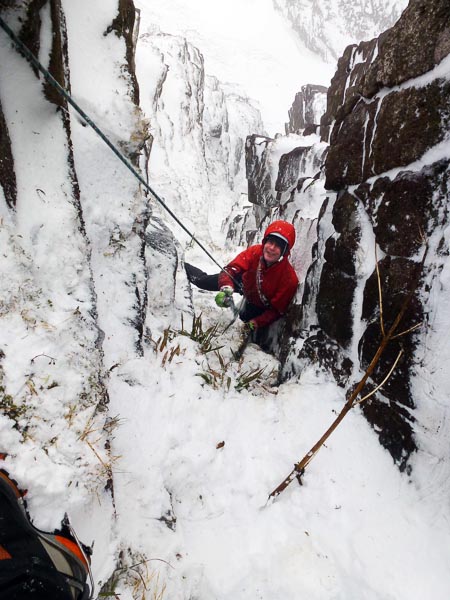 Dave McGimpsey pulling out of the top of the chimney during the first ascent of Jinky (V,5) on Quinag. The cliffs on the West Face of Quinag are a good choice in very snowy conditions as they have a relatively short approach. (Photo Andy Nisbet)

“Ice conditions were very good in many places, but it was still hard to make the best choice,” Andy Nisbet writes. “Local enquiries always talked of deep snow and tough walk-ins. Plus the weather was slowly warming up as high pressure pushed gradually into England. So the longer-term plan was to start north and low and work south and higher as warmer air pushed first into the north. So on February 4, Quinag it was.

A couple of years ago, Jonathan Preston and I had climbed two lines on the sidewall of the biggest descent gully on the Western Cliffs. The advantage of the gully wall was that it didn’t get much sun so stayed in nick longer than the front faces, which were distinctly bare that day in 2013. But there was also a gully that we hadn’t climbed because there was no chance of it being frozen. This time it had been cold for a while and maybe it would even be iced.

The walk-in was deep snow right from the road but I’d done that before and it wasn’t that far. That opinion had changed a couple of hours later despite having trail breaking Dave McGimpsey with us. Still, the gully looked good and white although the amount of ice was disappointing. I went first, partly because the wind was getting up and suddenly we were all cold, and soon discovered the ice wasn’t that great, so I moved out on to well frozen turf on the right wall.

Jonathan had the next pitch, quite a chimney and which looked promisingly white. An extensive digging operation created only an overhang, and since I hadn’t taken hexes, not enough protection. Having just been to see Valley Uprising, Jonathan wedged the two largest nuts side by side and they might just have held. But the theory was never tested as the turf over the top was solid.

Dave led the last pitch very quickly just as the mist cleared and we marvelled over the view to Suilven and Stac Pollaidh in the distance. And Rubha Hunish at the northern tip of Skye was just visible. The route was called Jinky (V,5), not after the famous footballer (although I’m sure he would have enjoyed it too) but after I said it jinked left and Dave was puzzled by that usage. Maybe he’s not a Celtic follower.”