Posted on February 10, 2015 by Simon Richardson 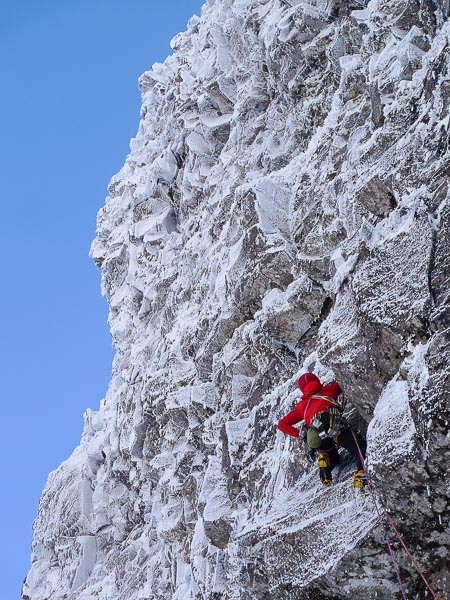 Murdoch Jamieson leading pitch 6 of The God Delusion (IX,9) on The Giant’s Wall on Beinn Bhan. “This was a marvel of route finding and a lesson in rope management. Murdoch did a sterling job of extending everything, even at the cost of losing most of his hexes to complement his dwindling supply of quickdraws.” (Photo Iain Small)

Iain Small and Murdoch Jamieson visited Beinn Bhan on February 3 and made the third ascent of The God Delusion (IX,9). This legendary route was first climbed by Guy Robertson and Pete Benson in 2008 and is considered to be one of the most challenging routes on the Northern Highlands. Iain and Murdoch travelled up to Applecross with an open mind and were contemplating attempting The Messiah, only to find that Greg Boswell and Guy Robertson had climbed it the day before. Iain takes up the story:

“After Godzilla we were both harbouring an urge to get on the Giant’s Wall again. With the continued good conditions in the North-West this happened more quickly than we bargained for. I think we’d both spent a wee bit too long staring at photos of the Giants Wall… Did any of the features link up? …How do you read that maze of grooves and ramps? One feature that you couldn’t miss was the huge roof capped corner guarded by a perplexing barrier wall below [the line taken by The Messiah]. That could be an option?

Late Monday evening in Kishorn and down came the weary Monday shift from the Wall. It sounded hard and the faces told us all we needed to know – time for the back-up plan. Another walk through hail and wind but with occasional moonlight brought us back into the land of giants and The God Delusion.

The route went well and Murdoch topped out only just needing the head torch but soon the moonlight was enough to see by. There were lights over Portree, and further flung spots we couldn’t quite guess. And all around us Applecross shone bright in the moonlit snow.”