Day Two At The Pyramids 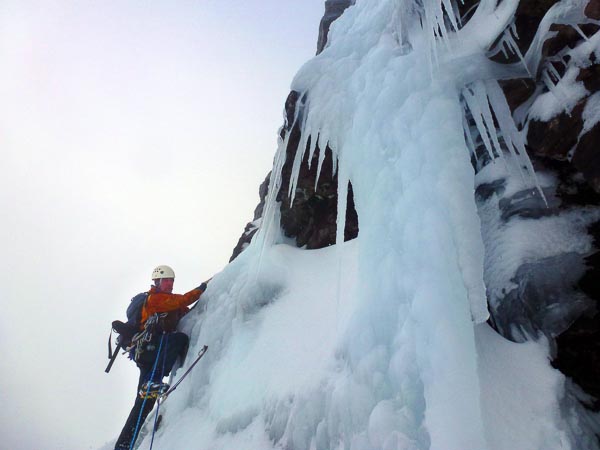 Jonathan Preston on the first ascent of Cheops (V,5) on Pyramid Buttress on the south side of Liathach. This was the second route of an Andy Nisbet-inspired blitz seeking out unclimbed ice. (Photo Andy Nisbet)

“The weather was changing as predicted so there was no time for a rest day,” Andy Nisbet writes. “On February 5, Jonathan Preston and I were heading for the Pyramid Buttress on Liathach. Thanks to the Internet and a pretty picture of Liathach a few days before, my eyes had focussed on a tiny ice strip on the buttress. Allowing for the picture having been taken from several miles away, the ice strip should be climbable, although I hadn’t realised there had been such heavy snowfall in the interim.

We started a bit later than normal because Pyramid Buttress was fairly accessible, and weren’t worried when the engine in Jonathan’s van kept cutting out, therefore arriving at about 9am. It did seem radically warmer than the day before and with snow down to the road, but we were in no hurry and would just do 20 minutes trail breaking alternately. And we could just see the buttress through a gap in the mist, with plenty of ice. Actually it was the last time we saw it.

A few 20 minutes later and we were making progress, although each 20 minutes gained less height as the snow got deeper and deeper. Fortunately I’d climbed the Right Edge a few times and the Right Icefall once, so I knew the way in thick mist. It was drizzling at times with no hint of freezing, so we did get rather wet. And by the time were making the scary traverse to the foot of our line (steep soft snow on the lip of a white drop of unknown length), it was after 1pm. Traversing under the various icefalls, I was gobsmacked by how much ice there was; much more than I’d ever seen before, and I’ve been to Liathach at least 100 times in 35 years. Our line, a separate line of ice some 30m left of the Left Icefall, looked good with some very (very) steep sections. Unfortunately all the icicles were dripping and the snow was sludge.

We soloed up the first easier pitch to below the main line, which I volunteered to start. The placements were deep, too deep really but felt solid enough, although the feet had to be kicked in hard to be sure of holding. I wasn’t confident of ice screws as runners so I went straight up to a groove on the left edge of the ice and a pleasant surprise when the groove held a deep crack, very unusual on this rock. Nuts seemed to fall out the bottom but my largest one held (it later fell out). On the assumption it was good, I went for the top of the ice, with a slushy exit when the runner was really too low. Steep snow led to the next section of ice, which was plumb vertical for at least 15m. It would have made a brilliant Grade VI on a cold day but today I was happy to belay out from the drips and leave the problem to Jonathan.

As I looked around while he climbed, there did seem to be a hidden groove to the left and which led to another groove left of the steepest ice. Jonathan had spotted it too, and even found some good rock runners on the way up. The pitch was longer and more technical than the previous one but three steep steps led to below another vertical icefall. It was a day when leaders belayed optimistically below steep sections, and the new leader found a way round them. I traversed 10m right, climbed an icy chimney and then angled back left on turf to the original line. Now we were on easier ground and a long pitch led to the top. I dare say we’d have graded it IV,5 on a freezing day but it felt V,5 on a wet day, so we’ve left it at that. Cheops is a pyramidal name, which sounded a bit like the conditions.

We weren’t bothered about the summit, and I knew the way down, so we traversed above the crags until the bum sliding could begin. Deep wet snow may be tedious on the way up but brilliant on the way down. A series of long safe slides interspersed with short walks got us most of the way back to the van. Four hours up, 35 minutes down!”