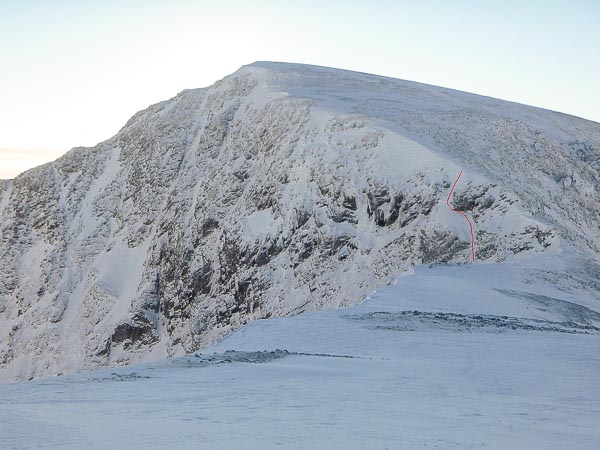 The North Face of Aonach Beag from the Aonach Mor-Aonach Beag Col with the line of Highway Robbery (III) marked in red. The steep icefall of Stand and Deliver (V,5) is the next prominent line to the left. The face has been in good condition recently and the rarely climbed Camilla (V,5) and Blackout (IV,5) have also seen ascents. (Photo Ken Applegate)

The North Face of Aonach Beag has been icing up nicely over the last three weeks, and there have been several ascents of the Robin Clothier-Chris Cartwright test piece Stand and Deliver (V,5). I say test piece, because many teams find it very steep for Grade V, but when Robin and Chris first climbed it by nipping across from the CIC Hut one fine day in April 1989, they graded it IV.

On January 19, Scott Kirkhope, Ken Applegate and Hannah Evans made the first ascent of Highway Robbery (III), the short ice line to the right of the existing routes. They were on their way to climb Stand and Deliver, but lost their way in the mist.

“We were in the cloud whilst walking over Aonach Mor and down to the col, and the visibility was pretty poor, “ Ken explained. “We descended from the col, and simply started climbing too soon, as we should have descended a further 50m or so. We realised our error soon after starting out on the first pitch, but thought that it would be easier to finish the line, and then head back round to the col and back to Stand and Deliver, rather than to backtrack.

It turned out that the main icefall of Stand and Deliver was completely obvious, even in the mist, once we were stood directly beneath the route!”