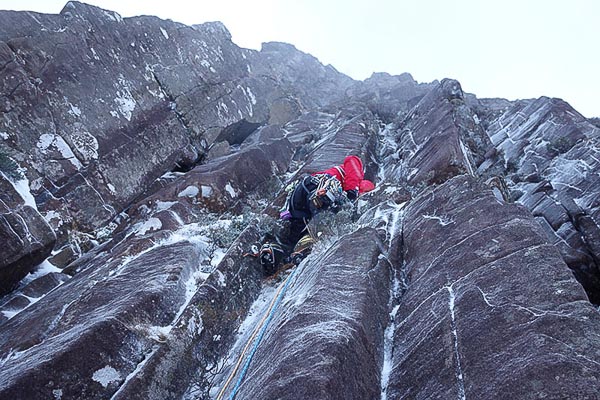 Ian Parnell and Kenton Cool made a spirited attempt at a winter ascent of the full height of the A’Chioch buttress in Applecross on February 1. In the process they made a possible second winter ascent of Cioch Corner Superdirect (VII,8), but a complete ascent of the buttress eluded them. Ian takes up the story:

“I drove up with Kenton Cool on January 31 having agreed that we should do something big in the North-West. We knew conditions were amazing, but even so, I was initially unsure about the Cioch. Unfortunately as we drove up Kenton explained he’d mixed up his diary and we had to be back in Oxfordshire by 6am on Monday. The Sat Nav suggested an 11.5 hours drive, so Beinn Bhan was out. We wandered in on Saturday afternoon to the Cioch when we got up there. There was ice and snow in the first two grooves of Cioch Corner Superdirect, first climbed by Martin Moran and Chris Dale in five pitches in 2003 at VII,8, but the the prize is to carry on up the upper corner which looked black. Luckily the HVS and VS’s left of the Cioch Nose on the upper wall have a different aspect and were holding snow.

That night temperatures dropped three degrees and the snow level lowered from 300m to two inches at sea level. Next day as we climbed, I quizzed Kenton and it became evident that we had a 4pm cut-off. We climbed seven (and three-quarter) pitches up Cioch Corner Superdirect and then half of Forgotten Corner. The top pitches were VIII,8. With one final pull and then probably another VI,7 pitch to top, 4pm came so we lowered off.

Kenton arrived home at 5am and I got to Sheffield at 3.30am. So no tick, but we tried!”

Simon Richardson is a passionate Scottish winter climber
View all posts by Simon Richardson →
This entry was posted in Repeats and tagged A'Chioch, Ian Parnell, Kenton Cool. Bookmark the permalink.