Ramp It Up Ye in Glen Clova

Posted on February 6, 2015 by Simon Richardson 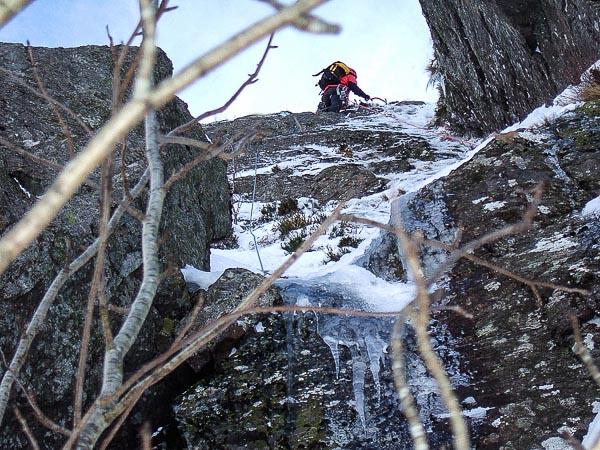 Brian Duthie on the first ascent of Ramp It Up Ye (IV,4) in Winter Corrie, Glen Clova. The route climbs the front face of The Scorrie, the broad buttress bounding the lower right side of the corrie. This feature was first climbed in summer 1931 and the recorded winter routes take lines further left. (Photo Forrest Templeton)

Forrest Templeton and Brian Duthie found a useful poor weather addition to Winter Corrie in Glen Clova on January 18. “We headed down to Glen Clova in the hope of avoiding most of the snow to the west and to seek shelter from the gales forecast for the day,” Forrest explained. “It was gusty enough at the car and a walk up to Winter Corrie in the hope of belting up something easy and quick was planned. The wind was a mental deterrent and a line was spied on the lower section of The Scorrie which looked worth trying, which resulted in the 200m-long Ramp It Up Ye (IV,4).”

The route is approached from the Winter Corrie path by cutting off right just before the angle eases. It starts from a little niche almost directly below and slightly to the left of an obvious tree about 25 metres up, and follows a succession of grooves and corners for two pitches up the steepest section of crag. Three full pitches then lead directly up the buttress edge where the angle eases. It is possible to make a descending traverse left from here (and avoid bad weater on the plateau) and join the path coming down from Winter Corrie.