All Go on Creag an Socach

Posted on February 5, 2015 by Simon Richardson 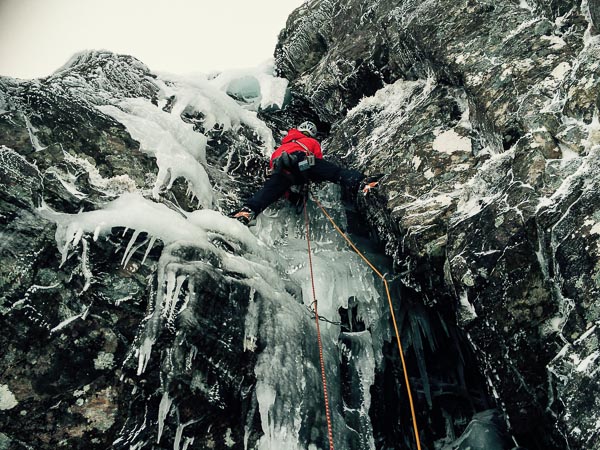 Stuart McFarlane climbing the ice chimney of The Promised Land (VI,6) on Creag an Socach in the Southern Highlands. This pitch is also climbed by Deliverance (VI,6) that had an early repeat in the hands of McFarlane and Dafydd Morris. (Photo Dafydd Morris)

It’s been a busy couple of weeks on Creag an Socach above Bridge of Orchy with the rarely formed classics of The Promised Land (VI,6) and Messiah (VII,7) in good condition and seeing several ascents. They were first climbed by Graham Little in the 1980s (The Promised Land with Dave Saddler in March 1987, and Messiah with Bob Reid in January 1988) and were significant ascents during the development of Southern Highlands mixed. Both routes follow strong lines, but unfortunately they are not often in condition.

Stuart McFarlane and Dafydd Morris had an excellent weekend making an early repeat of Deliverance (VI,6) on January 31, and then climbing the bulk of Antichrist (VI,7) with Andy Clark the following day. Deliverance was first climbed by Al Powell and S.Elworthy in January 1995 and is a direct variation to the central section of The Promised Land. “Deliverance is a superb direct line,” Stuart enthused. “We couldn’t really work out where hairline crack on Antichrist went, so we took the obvious winter line which lead onto the top and joined Second Coming.”

The hairline crack on Antichrist is on the fourth pitch. When Roger Everett and I made the first ascent in March 1992, we were determined not to deviate from the tapering pillar defined by the fault lines of The Promised Land and Second Coming, so we climbed directly up the apex of the pillar via an impending wall cut by a hairline crack. “A series of steep moves on widely spaced tufts (not visible from below), lead to a ledge,’” the description (rather unhelpfully) reads. “Protection is in the form of a poor knife-blade peg in a crack on the right.” I remember being particularly proud of this pitch and the crucial ‘tuft’ on the crux move was the size of a postage stamp. I’m not sure if this pitch has ever been repeated, but I’m sure with a Pecker or two, it could be better protected than on our ascent. The name of course, was a playful swipe at Messiah, which Graham and Bob had climbed four years before.

The current guidebook suggests that Deliverance and Antichrist may overlap to some extent, and Stuart has several comments on the descriptions that may be useful for the next guidebook. ”Deliverance starts at flakes below steep rock (Promised Land), moves back right, steps up, then moves left and up a turfy groove to a belay overlooking the ramp of The Sting. Turfy ground then leads diagonally up right (joining Antichrist) through a bulge into a steep groove, stepping left around a block, into snow bay beneath ice chimney of Promised Land. Antichrist starts 5m right of flakes, goes straight up the groove above (Deliverance goes up left one), then takes turfy groove going slightly leftwards to bulge (common with Deliverance), before traversing right, sensational exposure, belaying on ledge on arête. This is a fantastic pitch! Even without last 20m pitch, this would be a worthy V,6 in it’s own right!”