Too Old to Rock and Roll 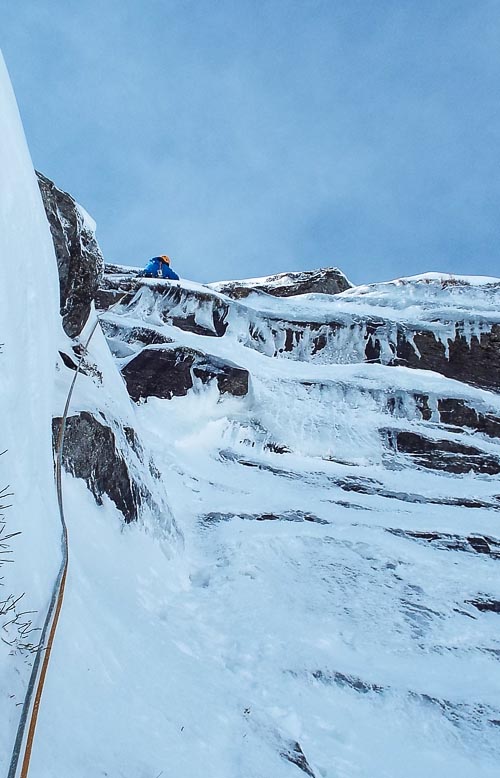 Simon Richardson on the first pitch of Too Old to Rock and Roll (V,7) in Glen Clova during the first ascent. The crucial hanging icicle leading through the overhanging headwall is hidden in a bay above. (Photo Sophie Grace Chappell)

I’ve been watching an icicle grow in in Glen Clova’s Corrie Farchal for a number of weeks now. It’s situated on the buttress high up on the right side of the corner and makes the central line up the front face of the buttress through the overhanging headwall a possibility. The lower wall ices readily enough, but the only weakness in the upper section is an alarmingly steep corner whose walls overhang steeply on both sides, but fortunately it forms a hanging icicle.

Sophie Grace Chappell was keen for a look, so on March 2 we headed up ahead of an approaching front. The first pitch was steeper than it appeared from below, but the turf was good and even yielded a couple of bulldogs as runners. I belayed in a bay below the icicle, which was complete, but it looked rather thin and fragile. I suspect it had suffered from the ravages of the sun the previous week, and will probably soon disappear completely as the sun rises higher in the sky, so it was now or never. Sophie came up and we rearranged the belay to provide protection from falling ice and I set off.

A token ice screw on the approach ramp and a sling round the narrow base of the icicle itself did not inspire much confidence, but I managed to three-quarters place a stubbie in better ice and tie it off. The icicle was a narrow fragile free-hanging chandelier and most of it fell down with a single hit, but the six-inch wide column that was left seemed solid enough. Some steep pulls led to an icy dollop on the right wall where I could bridge my foot across and collect my thoughts for the steep exit onto unconsolidated powder top out. Fortunately a helpful clump of heather emerged below the powder and after some awkward contortions I pulled through just as the weather turned and it began to snow.

SG followed with consummate ease and then led the final pitch to the plateau. Reflecting on the grade, it was probably the hardest ice pitch I’ve led for a long time and the protection was poor, but the crux section was short so we settled on V,7. In better conditions it could be a V,5 romp. Time and future repeats will tell!

Postscript: Sophie and I returned on March 10 to add Too Young to Die (IV,6) a companion route to Too Old to Rock and Roll up the blunt left arete of the buttress. We also climbed Coffin Dodger (IV,4) up the rounded icy buttress between the gully lines of Brains Before Brawn and Over The Hill. Also in Clova on March 5, Forrest Templeton and Brian Duthie found The Scrorrie Romp (II) which takes the prominent right to left ramp-line up the impressive headwall of The Scorrie.