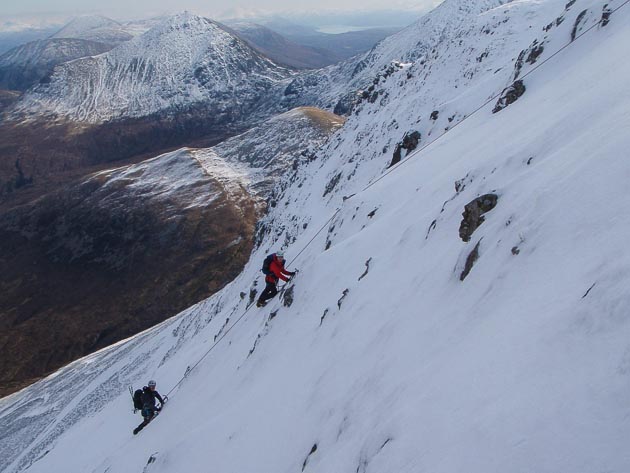 Linda Gentlemen and Lorn Smith on the Left-Hand Finish to S Gully (III) in Coire nan Laogh on Marsco in Skye. The corrie can be glimpsed when driving around Loch Ainort on the A87 between Broadford and Sligachan. (Photo Martin Holland)

“This was the only route in the guidebook in Coire nan Laogh and the description sounded intriguing,” Martin explained.  (The guidebook description states that ‘frozen turf, rock and wool (!) under thin snow’ were used on the first ascent). “When we got in to the corrie, Wooly Gully looked banked out and I’m guessing it was first climbed in leaner conditions, so we decided on climbing the big central S-shaped gully.

We soloed through great scenery on the first easy bends of the S and put ropes on before the final bend of the S. This gave a good pitch of ice, steeper on the right and easier on the left. Above the gully the face could be climbed almost anywhere at about grade II bringing you out about 100m east of the summit. The upper face, although easy angled, had serious feel and ice screws and warthogs were useful for runners and belays. It’s worthy of a star for its scenery and where it brings you out on the hill.

We climbed in parallel as two teams with John, Linda and Lorn taking the left-hand more rocky line on the upper face and me a right hand more icy line largely as I had more ice gear with me. Conditions and weather were excellent.  S Gully (III) is a very obvious line, so slightly surprising that it had not been recorded before!”

1 Response to S Gully on Marsco