Big Weekend on the Ben 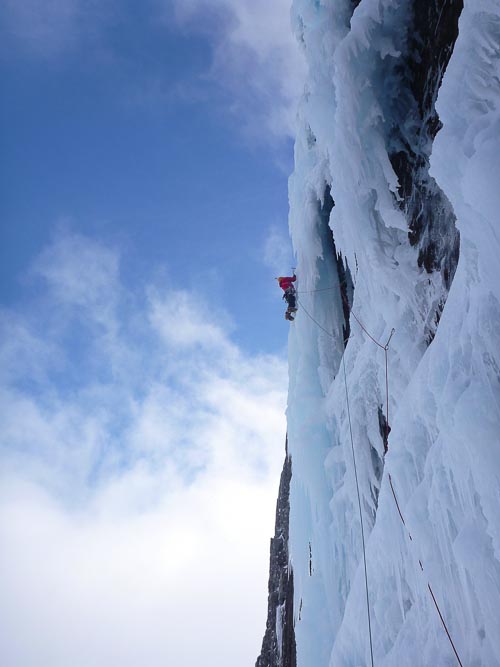 Rob Patchett leading The Shroud (VI,6) on the North Face of Carn Dearg on Ben Nevis. This may have been the first ascent of the season. (Photo Helen Rennard)

Helen Rennard had an outstanding weekend climbing on Ben Nevis last weekend. On Saturday March 5 Helen climbed The Shroud (VI,6) on Carn Dearg Buttress with Rob Patchett and Dougie Russell, and on March 6 she partnered Dave MacLeod on a new route called Night Fury (IX,9), which lies just left of The Urchin in the East Face of Tower Ridge. Here is Helen’s account:

“I was climbing with Rob and Dougie on the Ben on Saturday. It was my first time out with either of them and it was good fun. We were planning to climb The Shroud but changed this to ‘whatever is free’ when we found the North Face car park already full at 6am. Six of us piled into Dougie’s van for a lift up the track, the extra weight almost bringing it to a standstill on one snowy incline. Walking in we could see that The Shroud was free and there was only one party heading in that way, so we stuck to Plan A.

I led the first easy pitch and then Rob had the crux. The right icicle was a metre or so from touching but the left one was fully formed. The ice up to here was sugary and Rob did a great job keeping calm a long way above a rubbish ice screw, until he reached the relative sanctuary of some in situ gear. Once onto the pillar the quality of the ice improved massively and it was brilliant fun to climb. I tend to avoid ice in favour of mixed so was happy to have a rope above me on this. We think this was the first ascent of The Shroud this season, though we may be wrong. On our way down we found two ice screws and one nut – not a bad haul! Adrian Crofton and Al Robertson, who were staying at mine for the weekend, had had a good day on Waterfall Gully Direct, and on Sunday they climbed The Promised Land on Beinn Dorain.

The next day I was out with Dave MacLeod, again on the Ben. After a quick stop at the CIC for tea and a spot of autograph-signing (by Dave – the lady looked a little perplexed when I said that she could also have mine…) we set off up Observatory Gully to try another new line near Red Dragon (on the East Flank of Tower Ridge). This was a line a few metres left of and parallel to Urchin which Dave Garry and Simon Frost had looked at two years ago. Dave MacLeod and I had been to try it back in January but it was heavily verglassed and Dave downclimbed the bottom of the first pitch on verglassed crimps. He kindly offered me a go at leading it but I declined, thinking that if he wasn’t getting up it then there was no chance I was.

On Sunday the route was again verglassed, though not as bad. After the initial difficulties on the first pitch Dave went out of sight. Though I couldn’t see him I could hear that things weren’t great – the gear he had got was poor, and he had then climbed a protectionless verglassed groove a long way above this. The hex he had eventually got in above this took a while to hammer out! Dave had brought his Go Pro rather than camera and when I realised he could record audio on this I regretted the amount of swearing I’d been doing trying to untangle my fankled lanyards on second… The obvious line for the top pitch was straight up overhanging IX,9 ground. There was an easier route to the top, traversing off to the left, but this seemed a bit of a cop out. Again Dave led. He wasn’t happy to commit to the crux moves until he had got some gear in. Once he’d hammered in a terrier he pulled through on thin hooks and no feet, locking off to reach up for more thin hooks. Desperate stuff. Seconding this I managed to knock the terrier out with my hand – it was useless!

We abbed down back down to our bags, chatted with Dougie and Adam Russell who had backed off Brass Monkey because of the amount of verglas (which shows just how well Dave had done), called in at the hut for more tea (but no food for Dave, as someone had thrown away what he had left on the table!) and then a wander down as it started to snow.”

1 Response to Big Weekend on the Ben