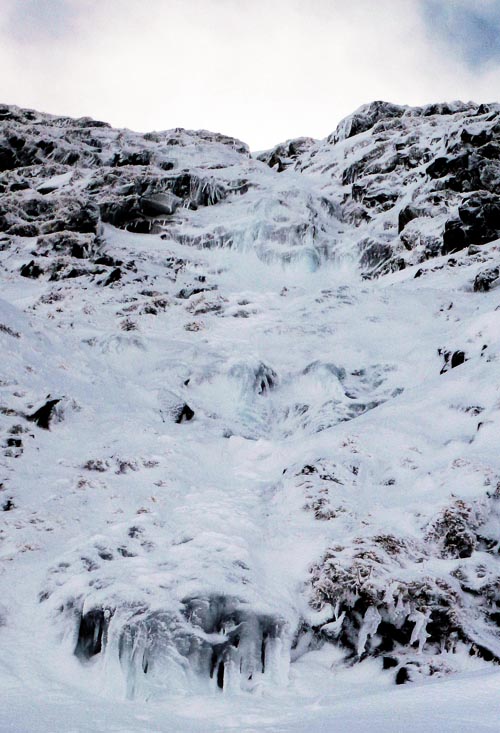 Looking up the lower half of Double Salchow (IV,4) on the West Face of Beinn Dearg with crux ice pitch visible high up. This 350m-long route follows a continuous line of ice (and snow) just right of the crest right of Silken Ladder and left of Peace Process. (Photo Andy Nisbet)

Andy Nisbet and Dave McGimpsey visited Beinn Dearg in the Northern Highlands on March 3 and found rather more white stuff than they anticipated. Andy takes up the story:

“’Is it just me, or does our route look like a snow slope?’ So said Dave McGimpsey after two hours of wading through deep sludge towards the West Buttress of Beinn Dearg. And it did, so much so that we talked about abandoning it and climbing something nearer on the Glensquaib cliffs. But they looked pretty plastered too, and I only knew of a couple of poor quality new lines.

We need to offer thanks to Mark Chadwick for a useful blog picture, intended to show the Ice Hose but also showing another line with more ice than I’d ever seen before. But on the day, the cliff showed little resemblance to the picture, plastered pure white and hard to even pick out the ice lines. After some recent thaws, we had chosen a higher option than Skye and were just beginning to regret it.

But we decided to bash on and see what it was like. As we approached the cliff, the snow began to firm up and we were able to walk on its top on the slope below the line, which we could now pick out. Things were looking up. It had snowed a fair bit overnight but the wind must have been blowing up, as some recessed areas were packed with soft snow but most of the crag was blown clear.

The line was a shallow gully just right of the steep edge of the famous part of the West Buttress (with Ice Hose and Silken Ladder). Above halfway was much more general snow and ice but I knew from Mark’s picture that there was a good line of ice, just it was now part buried. The route was going to be long (it’s a big cliff) and with limited protection apart from ice screws, so we’d gone light and hoped to solo up as far as possible. Initial ground was easy to the first significant ice pitch which after discussion, we soloed too. Dave seemed happy and the ice was solid, but to me it didn’t seem as predictable as the steeper ice on Skye, so above this I was keen to put the rope on for what was likely to be the crux.

There were a couple of steep pulls above a good ice screw, then a longer groove which still kept the mind focussed, after which the ground slowly got easier to reach a halfway terrace. Above was white and extensively icy but we knew there was a line of thicker ice under the snow. Some of the ice was good, some brittle and some under deep snow. It was Grade III at most so we just kept going in three extended pitches to reach the top.

There was so much snow that the wall at the top of the cliff was buried, only the top rocks showing through, but the snow was still largely wind blown and it was easy walking down to the descent gully between the west and Glensquaib Buttresses. Despite our steps, it was hard going walking out, partly because the day had warmed slightly. My legs were protesting but the thought of a high speed free wheel out on the bikes kept me going.

We discussed the grade. We could have gone for III,4 but it felt a big route so I was allowed to grade it IV,4. Irish names were becoming a little boring so it’s provisionally called Double Salchow, an icy name for a route with two sections and two climbers but admittedly no leaps into the air.”