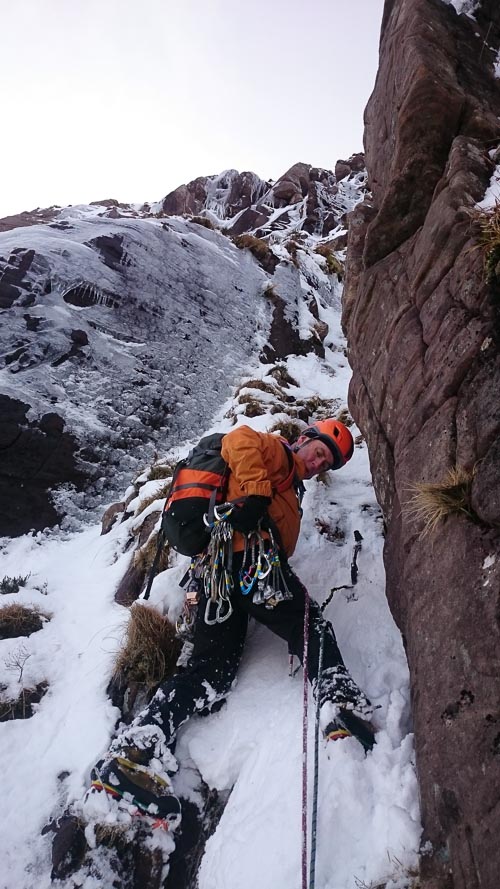 Neil Wilson on the first ascent of A Good Outcome (IV,4) on Beinn Damh in Torridon. The route climbs the broad buttress to the left of Traveller’s Trail on the right side of the cliff. (Photo James Edwards)

James Edward and Neil Wilson had a very successful day climbing on Creagan Dubh Toll nam Biast on Beinn Damh on February 28. “I’ve been putting off going there for around ten years,” James told me. “The cliffs are close to the sea, their altitude is that little bit lower, and there were rumours of stringy turf that was reluctant to freeze. These were just some of my favourite excuses for not going to have a look!

Having dislocated my thumb at the start of December whilst out with the Mountain Rescue team (I slipped on wet grass 500m from the road!) I thought that if the conditions didn’t play fair we would just enjoy a good hill walk around a new hill.

The turf was a little stringy on the first pitch, but became better very quickly. We climbed eight full-length pitches, each getting slightly easier with height until the last one surprised us with a delicate move (Neil) or a belly flop (me) to get through the last sandstone tier. There was still 200m of Grade I left until we came out directly on the North Summit but, as is the tradition on this cliff, we aren’t including it in the description as it would then be the longest vertical climb in Scotland!