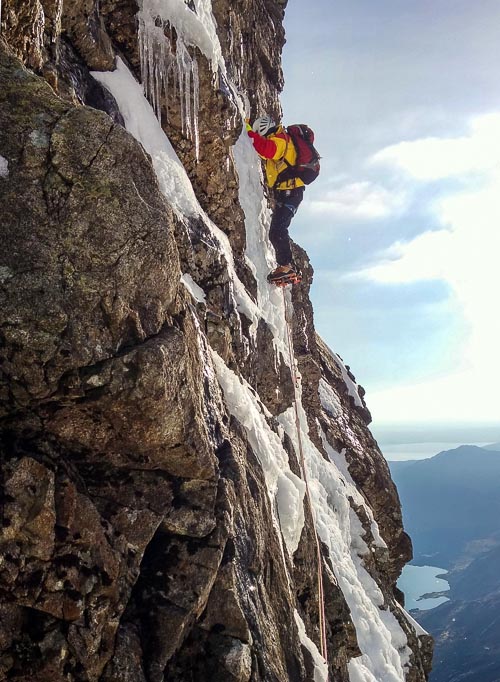 Andy Nisbet on the crux pitch of Skyefall (IV,5) on the south-east face of Sgurr a’Ghreadaidh on Skye. This is the first route to be climbed on the cliff. (Photo Dave McGimpsey)

“If you look at the picture in Part 1, you might just see a thin stripe of ice leading into a gully high on the left side of the Coruisg face of Sgurr a’Ghreadaidh,” Andy Nisbet notes. “We certainly did, so that was the target for the next day and enough to persuade me to stay in Skye.

I searched the Cuillin guidebook to see what routes already existed on the face, and the winter answer was none. Now it was a case of how to get there. The guide said to climb Sgurr na Banachdich, go down to the col before Sgurr Thormaid and descend easily. I was well impressed by such detail for an obscure crag previously reached from Loch Coruisg, but not at all impressed by the approach time of two hours. I’ve got a thing about guidebook authors and ridiculously fast times, and when the Munros guide has 2hrs 40mins for Banachdich alone in summer with a light pack, this really wound me up. OK, I was tired from the day before, but it took us three hours just to get up Banachdich. Actually snow conditions on the Ridge were fantastic, the scenery descending into the corrie was amazing and we were at the crag soon after.

The summer routes are mostly on a lower tier, which was below the snow line, but we were able to gain a halfway terrace easily on good snow. The short night, early start and long approach were catching up with us, plus time was getting on, so when we looked up at the steep and possibly thin ice line, neither of us fancied leading it. Not helped by the option of an easier line, still on ice, heading off left to gain the main ridge lower down.

We chose this and zigzagged around on banked up snow ledges and up a big groove to a cul-de-sac where we got the rope out. The right wall was iced, thick enough for an ice screw, and gave a short steep pitch into a huge enclosed amphitheatre. Ice leading out of its top was tempting but I was on ‘survival mode’ so we carried on left to the main ridge. The route was called Griffin (200m III,4), for no particular reason other than it was a nice name.

Now the question was how to get down. I knew from summer that neither left nor right was simple, and unable to make up my mind, Sandy said, ‘why don’t we just go straight down?’ I protested that guidebooks warned of all kind of trouble doing that, but I wasn’t thinking about good conditions in winter and we didn’t have any great trouble descending a gully which I later discovered was Diagonal Gully (Grade II). Further down, we came across a fine looking gully on a nearby crag, wondered if it had been done before and when we could come back up to do it. It turned out to be White Wedding and in unusually good nick, it had already been done twice that week. It shows how little we knew about the Cuillin. Despite my worries about time, I was back in Inverness before it got dark.

Of course the steeper ice line was still there, and with a good forecast for a few days, a line on the north face of Ghreadaidh wasn’t going anywhere. Sandy was working so I roped in Steve Perry for a Skye trip on Sunday (February 28), the last good day before the weather broke. On the Friday, Dave McGimpsey phoned to say he was back from working down south and was there any climbing on the go? I told him the venue and he was definitely interested, not having winter climbed in Skye before. Later he phoned again and asked how we saw the north face of Ghreadaidh from the In Pinn, and was it perhaps the south face, and might the sun not cause us some problem. Actually it was the south-east face, which was even worse.

So plans rapidly changed and we drove to Skye that evening, reluctantly deciding to get up at 3am and walk in the dark. Just as well we did, although some early morning mist made the approach very atmospheric and dulled the effect of the sun. Steve led the first pitch, 50m of ice with a couple of steepish sections. We had loads of ice screws but he found a rock belay off to the left of the stripe of ice. I claimed the lead on this, and my apprehension immediately disappeared when I hit my axe in first time; the ice was thick and chewy despite the sun getting stronger and chunks of ice starting to fall down. An easing allowed the placement of a couple of ice screws before the steepest section but the ice was so good that after it, I just kept going to the top. There were still some icy steps before the angle really eased, so I kept going until the 60m ropes ran out.

The sun was hot now but the others climbed quickly as bigger lumps started to fall. The upper gully was part hidden from the sun and turned out to be only steep snow. They set off on a single rope each, leading together and ready to stop at any difficulty. But conditions were so good that they didn’t stop until the top. The descent was the same and we even discussed a quick ascent of White Wedding before common sense kicked in. The name Skyefall was suggested as highly appropriate, if it hadn’t been used before, and we were delighted when it hadn’t. I decided on a grade of IV,5 and although I know it’s high in the grade, there was only one section of 5 and Grade Vs on the Ben had more. I thought it was similar in climbing to Pumpkin (Meagaidh) and most folk think that is more like Grade IV.

It was one of those special days, which justifies all the scrabbling around in bad weather, and one which would make you content even if the winter ended tomorrow. Which it won’t. Now what’s the forecast?”