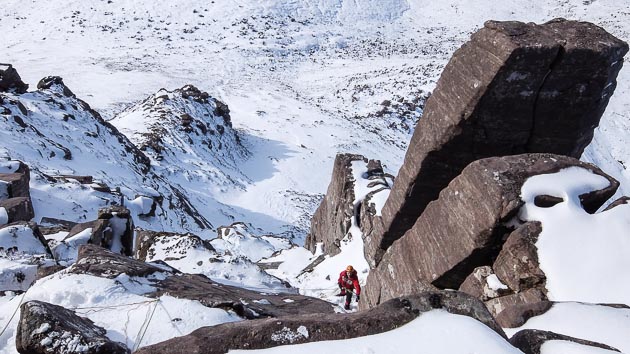 John Higham on the first winter ascent of Western Buttress Edge Route (VI,7) on Stac Pollaidh. This summer Severe was first climbed in 1991, but its westerly aspect means it is rarely in winter condition. (Photo Iain Young)

“On February 25, John Higham and I headed for Coigach,” Iain Young writes. “The forecast and a dump of snow on the Wednesday that had closed the road according to friends we have in Achnahaird made it an obvious choice (to us at least). A late arrival in Achiltibuie on Thursday night meant Friday was to be not too strenuous, so we headed for Stac Pollaidh. We were intrigued by the fact that a Diff climbed by Walker and Inglis Clark in 1906 on the West Buttress had apparently never had a winter ascent – so we headed there on a very fine morning indeed.

Starting from the lowest rocks below Baird’s Pinnacle (and Scotland’s answer to Digital Crack!) we climbed moderate ground to a belay in the breche between pinnacle and mountain. From there we moved a bit right then back left via an awkward step around a prow to gain slabs and the midway snow slopes. Upwards, we followed the logical and most aesthetic looking route on the junction between the West and South Faces. This led via more slabs, grooves and cracks to a move right and a final pull onto the summit ridge. None of this looked remotely like ‘Diff’ country from below, nor felt like it whilst climbing. The last pitch – a great lead by John – involved a couple of very tenuous moves on tools lay backing off a rounded edge before the sanctuary of well frozen turf was reached. So tenuous that I fell off seconding. Returning to read the guidebook it turns out we were on Western Buttress Edge Route for at least the top two thirds of our route. We debated the grade, VI,7 in the end, though with more ice in places, or perhaps summer knowledge, it might well be easier.

There was so much snow around that our original plans for Saturday went on hold, and instead we headed to Garbh Coireachan on Beinn Mor Coigach for a straightforward winter ascent of West Ridge Direct as described in Highland Scrambles North. Amazingly for such a sunny spot we found lots of deepish powder, dry rock and the odd spot of frozen turf. The climbing was undistinguished (apart from a couple of very delicate moves up a steep slab) but the setting was incomparable. The crag and hillside below dropping straight into the ocean, snow capped hills of Harris on the horizon, sunshine, no clouds and not a breath of wind. Back down for cold beers sitting out in the afternoon sun! III,4 or 5 on the day but it can’t be snow-covered very often.

Another friend had planned to join us Sunday and we had another winter route in mind, but when he texted to say he couldn’t make it, we decided that some seaside cragging in the sunshine would be a more mellow end to the weekend – and so it proved!”