All Go on The Godfather 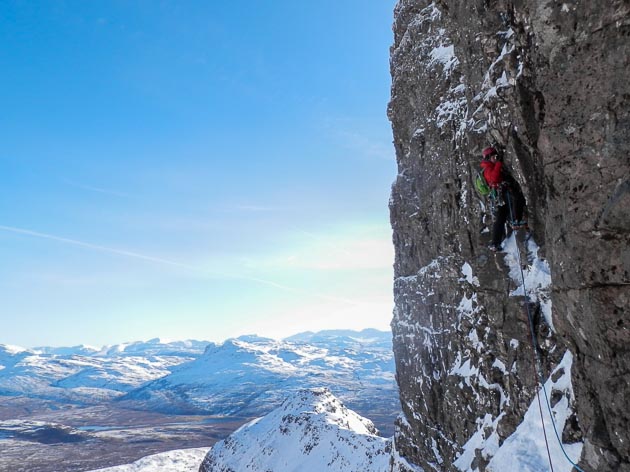 Helen Rennard leading pitch 2 of The Godfather (VIII,8) on Beinn Bhan. This touchstone route was first climbed by Martin Moran and Paul Tattersall in March 2002 and has become one of the most sought after high standard mixed routes in the Northern Highlands. (Photo Dave Almond)

In a similar vein to the two ascents of The Needle in a weekend in January, The Godfather (VIII,8) on Beinn Bhan in Applecross had three ascents in the space of five days last week. Helen Rennard takes up the story:

“Dave Almond and I had plans to climb last weekend and had various ideas about what to do and where to go. We decided on the North-West in the end as Dave was up there already: he’d climbed Rampart Wall on Beinn Eighe with Simon Frost and Gully of the Gods with Blair Fyffe through the week. Dave was keen for The Godfather and we knew that Uisdean Hawthorn and Ben Silvestre had climbed it on Wednesday. I was a bit less keen, worried that it was a serious undertaking and maybe a bit out of my league. I was a bit put off by Martin Moran’s account of the first ascent, but in the end I thought what the hell, and we agreed on that.

We pulled up at the parking spot at 4.20am on Saturday February 27 only to find two others about to start walking in. It turned out to be Tim Neill, who Dave and I both know, and Keith Ball, and they too were heading for The Godfather. Dave and I were happy for them to go ahead; they could do the route finding (though they actually had Uisdean and Ben’s tracks to follow) and we’d stay a pitch behind. It worked well, was sociable and made the whole day feel a bit less serious having them on the same route. Our friend Misha was also out on Great Overhanging Gully with his partner Mark. He’d driven up from Birmingham the night before, climbed on Sunday too, and then drove back!!

Two hours later we were at the foot of the route, still in the dark. It felt very Alpine-like with the still clear conditions and the sunrise behind us was amazing. After a bit of discussion about where the route actually started, Tim and Keith set off, then an hour later me and Dave. The route was fantastic: really nice climbing, steep but positive, good gear overall, something interesting on every pitch, a definite crux and a top out onto the summit under the stars (I’m not fast on these climbs… ) Dave did a great job leading the crux pitch. A walk out under a sky full of stars and we were back at the car just after 10pm. A comparatively short day for me…

Dave is extremely keen, gets by on a lot less sleep than me and was due back home on Monday, so it took a bit to persuade him to not climb the next day, especially with the fantastic forecast. We probably could have done something short but I was happy to have a pint at the Lochcarron Hotel, crash out in the car and wake up whenever. We had breakfast and cake at the new Bealach Café and sat about in the sun, which was very relaxing. A good weekend all round!”