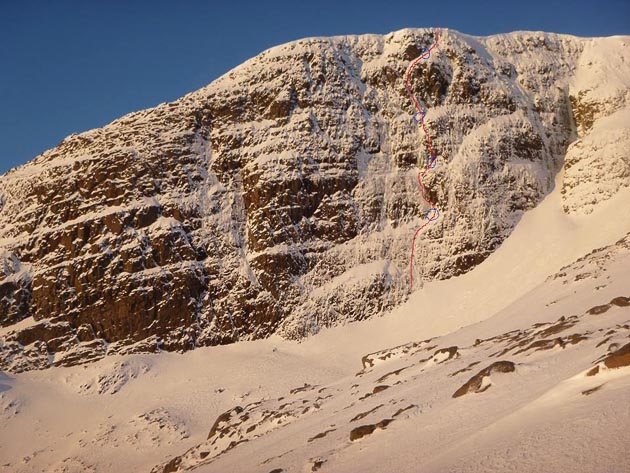 The South-East Cliff of Fuar Tholl with the line of The Ayatollah (VII,7) marked. The route was first climbed by Martin Moran in Ian Dring in February 1989 and was one of the most difficult ascents in the Northern Highlands at the time. Ten days later, Moran added another landmark climb to the mountain with Reach for the Sky (VII,6) on Mainreachan Butttress. (Photo/Topo Dave Kerr/Erick Baillot)

On February 28, and in less than perfect conditions, Rob Bryniarski, Dave Kerr and Erick Baillot made the long-awaited second ascent of The Ayotollah (VII,7) on the South-East Cliff of Fuar Tholl.

“Last year on a fool’s errand to see if Snoopy was in (a couple of days after the first winter ascent of Private Eye), Andy Sharpe, Dave Kerr and I decided to have a look at the main cliff seeing as though we were up there,” Erick told me. “A bit of mountaineering descent saw us at the bottom of the cliff and at 10am we were surprised to find the lines of Pipped at the Post, Cold Hole and Tholl gate formed. Temperatures were not in our favour (+4degC) so we decided to quickly go up the easiest/safest option of Pipped at the Post (V,5). This put the crag on our radar – it is probably in condition most winters at some point!

After careful monitoring of temperatures fluctuations Dave and I thought last weekend was it. On the approach, the crag looked in amazing nick. We had decided that Ayatollah should be attempted if possible. The Ice smear looked complete was all the way down the corner! It flattered to deceive and it was less than an inch of cruddy white ice that went down. Pitch one was quickly dispatched by Dave with spaced but very good rock gear (the ice would not take much). I went up the corner for one of the spiciest leads of my career… heart in mouth Type 2 fun! I probably had to climb much further up the roofed corner to be able to step left on minimalistic ice, about 10m. The ‘radical’ moves were very radical and my gear was not abundant and it’s nature did not inspire that much confidence, 1 terrier, 1 bulldog , and rubbish red BD cam and a red rockcentric (I was assured that the rockcentric was “bomber” afterwards). Once on the ice it was 20ish meter on cruddy easy Tech 5 (at most) ice but unprotected. I had one joke stubby screw in! The traverse under the icicle was done in a pure exhausted state and belay was a sanctuary with a monster thread!

The fun was not over. Rob continued up an awkward rocky groove before crossing back left above the icicle and the main icefall. The ice only began to be good and take screws towards the end. Dave led an excellent 45m pitch starting with a steep 10m ice step (which I found desperate but he tells me it was standard Tech 5 ice). Rob finished up the easy looking but not so easy exit past the cornice. I have used my quota of ‘out-there’ moments for the year and will happily hung my tools due to a house move… secretly my head is now fried!

By the way, grades? It easily felt the hardest thing technically I have done this year at hard Tech 7. I have no idea what a VIII,7 is but that is what I thought it would feel like! So full on old school VII,7 and probably my best lead to date!”

Postscript 3 March: The great thing about writing this blog is folk get back to me pretty quick when I make a mistake. It looks like Rob, Dave and Erick did not make the second ascent of The Ayatollah as I first thought. Muir Morton wrote me a helpful email this evening to say: “I climbed The Ayatollah with Dave Hollinger in February 2000. We did Tholl Gate on the same day. I did the rad moves pitch and remember the exciting step out left and thin but perfect ice. The same weekend we did Test Department (conditions were great) and stuck an axe into the bottom of Foobarbundee [both on Liathach], which looked worth an attack from below but we chickened out as the ice was a bit peely.”

2 Responses to The Ayatollah – Second Ascent