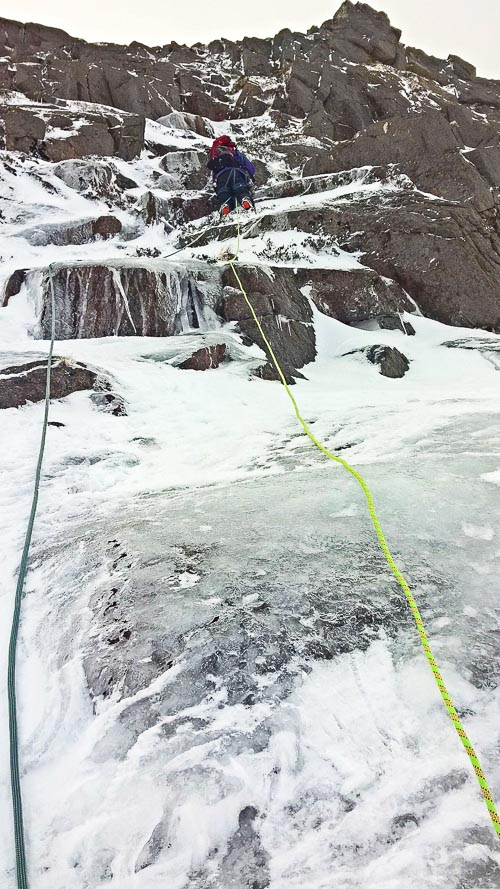 “The Akita is an independent and dominant breed (of dog), commonly aloof with strangers, so it’s ideal for a route name on Lurchers’ Crag where Steve and I don’t encourage strangers,” Andy Nisbet explained with tongue firmly in cheek. “Except for Central Gully, which has been in brilliant nick the past week, and everyone is encouraged to enjoy it. On February 22, we of course had another line in mind.

Earlier in the winter four of us climbed a line called Ultramontane (IV,5), barely frozen low down. We did look at a steeper line to the right but thank goodness we didn’t try it and waited for proper cold weather to freeze the turf. We approached as usual from the ski car park via South Gully and at the crag base met teams who had come through the Chalamain Gap. The times we’d taken seemed to be roughly equal but who knows. We could direct them to Central Gully, the gullies not showing up well from below, as we’d just walked past its base.

Our line had an icy start, which looked fairly easy, so I was happy to lead it and leave the overlaps above for Steve. Conned as usual by the Lurchers’ illusion and seeing plenty of turf, he was happy. I led the first pitch quickly and the second pitch still didn’t look hard. But what we hadn’t realised is that most of the apparent turf was straggly heather on top of smooth rock. Even when Steve slowed down at the very first groove and struggled up it with feet slipping, I was wondering if he wasn’t on good form. Until I got on it myself that is. It was very thin with only one good turf placement and a direct fall on to the belay (which was good enough). He managed to place a hook in a blind crack and this was enough to persuade him up to what was quickly looking like an unlikely overlap. The hook wasn’t going to hold a fall from there but he dug around and found a horizontal crack and good peg where the slab joined the overlap (Thank Goodness!)

The only turf which would take an axe above the overlap was too far right, and there was nothing for the feet over there, so it was a case of keeping the body in an out of balance position while gaining height. This got increasingly strenuous until he had to commit to the axe and pull through. This worked but it was far from over, as the next piece of usable turf was a long reach and hidden under snow and detached heather. Again there needed to be commitment to a single piece of turf of unknown attachment to the rock, and further standing around on one leg searching for something solid. The next ten feet were pretty committing until he finally got a runner. The pitch slowly eased in angle and he kindly stopped shortly before easier ground.

I led a pitch with only a short tricky start and then we decided to solo for a while and gain some time. We wanted a line between the existing routes either side, but not needing a rope, and were happy that a natural one followed, only joining Ultramontane for its final slab. Steve took a direct line up this and got his foot stuck in a wide crack. After a long struggle, which would have been amusing if we hadn’t been several hundred feet up without a rope, he had to step out of his crampon and finish the pitch with only one.

The weather was nice on top so it was a leisurely walk back to the car park. We graded it VI,7 without being sure whether it was Tech 6 or 7. Certainly the turf being at its best was essential. Anyone trying it unfrozen will soon fall off and the route might become impossible.”