Under the Western Sea 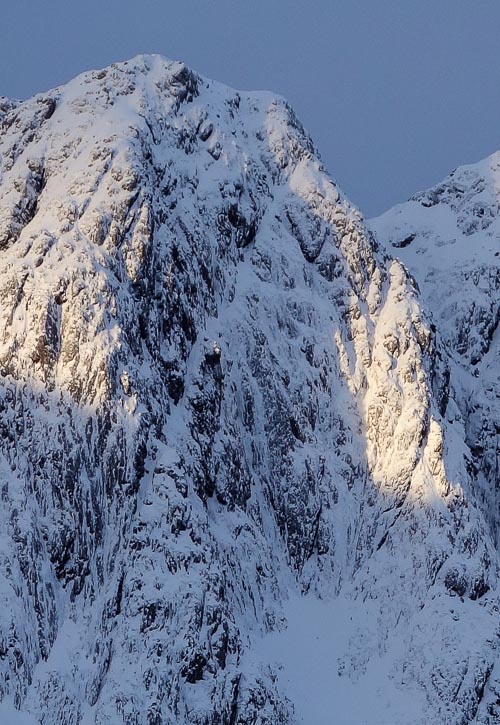 Without doubt, the 400m-high Spider Buttress on Ladhar Beinn in Knoydart is one of Scotland’s greatest winter cliffs. It’s central snowfield bears an uncanny resemblance to the Spider on the north face of The Eiger, and the cliff is sometimes described as Scotland’s Eigerwand. It’s remote situation, deep in the heart of Knoydart only adds to its aura.

The buttress was first explored in the late 1970s. Andy Nisbet and Paul Tipton added the superb looking Face Route (IV,4) in February 1978, which takes the most obvious line of weakness up grooves on the right side. Two weeks later, Con Higgins and A.Foster met the full challenge of the wall by climbing the line of ice straight up its centre. Tir na Og (V,5) takes a superlative line and is one of the most coveted winter routes in the North-West Highlands. Unfortunately its remote situation and proximity to the sea means it is rarely in condition and has seen only a handful of repeats.

Roger Everett and I were lucky enough to make an ascent of Tir na Og in February 1986, and ever since, I have dreamed of returning to the face. I was particularly attracted by the challenge of the steep barrel-shaped wall between Tir na Og and Face Route which has been described (rather enthusiastically perhaps) as ‘a last great problem’.

Roger Webb and I were planning a route in the North-West Higlands last week but deep powder snow on the approaches made us rethink. Ladhar Beinn lies further south, and is remote and difficult to get to, but at least most of the approach is at sea level. We left the car at 7pm on February 24 and returned at 3am two days later after a 32-hour return trip (which included a four hour kip in Barrisdale bothy).

Starting a big route when you’re more than seven hours away from the road feels committing, and in this case we weren’t helped by less than ideal conditions. The snow was not as consolidated as we’d hoped, the turf was aerated, and the attractive ice streaks running down the barrel-shaped wall turned out to be loose snow lying on rock. We did have a trump card though in the form of a photograph I had taken one autumn from the western side of the corrie that showed the wall was cut by a hidden diagonal slot. We were confident that once we reached that, the route would go.

The crunch came on the fourth pitch where a narrow sinuous chimney led up from the Spider. Logic dictated the chimney was the way but the side walls were blank and instinct told us that we’d be better off linking the blobs of turf on its right wall. A bold and absorbing 60m pitch led to the foot of the diagonal slot which was helpfully iced, and we knew then that the route was in the bag. Three pitches later, we arrived on the summit ridge just as it was getting dark.

I’d love to be able to report that Tir na Og was in good condition, but whilst it looked attractively icy from below, the ice was thin and unattached. I’d also forgotten about the rather unhelpful Ladhar Beinn mica schist. In seven pitches we just placed one nut and one cam for protection. All the other gear was bulldogs in frozen turf.

Unfortunately a visit to the mythical land of Tir na Og is far too late for Roger and I to preserve our youth, so Roger suggested we name our route its antithesis  – Tir na h-aoise (VI,6) – The Land of Age Sunken Beneath the Western Sea

13 Responses to Under the Western Sea