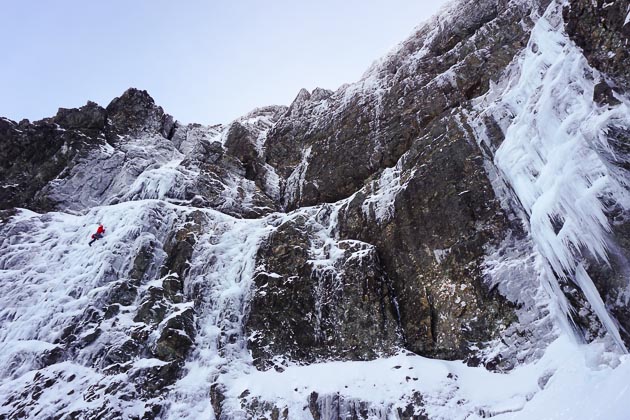 Uisdean Hawthorn climbing the first pitch of Spectacula (VI,6) on the North Face of Sgurr a’Mhadaidh during the first ascent. The line to the right is Spirulina (V,5) and Icicle Factory (VI,6) is on the far right of the picture. (Photo Adam Russell)

Uisdean Hawthorn has had an excellent run of routes in recent days. On February 23 he climbed Tango in the Night (VI,7) on Sgorr Ruadh with Ben Silvestre, and the following day they climbed The Godfather (VIII,8) on Beinn Bhan. On February 26 he linked up with Guy Robertson and Adam Russell for a new route on Sgurr MhicCoinnich and another in Corrie Lagan. Uisdean and Adam then teamed up with Dougie Russell on Saturday February 27 and visited the Amphitheatre on the North Face of Sgurr a’Mhadaidh.

“We were all keen to try Icicle Factory,” Uisdean explained. “Both Dad and Iain Small had mentioned it to me in the last few weeks. We were very surprised to see head torches already at the base of the route as we started the walk in at 6.30am. However, this wasn’t a problem and instead of following the early birds [James Sutton, Ben Wear and John Smith] up Icicle Factory [the second ascent], we just climbed a big obvious icefall on the left wall.

It was quite steep for 30m where a ledge provides a rest but no belay. A few steep pulls on a hanging icicle allowed me to pull over the overlap and continue on some easier angled ice to a belay. Adam did a 70m pitch with some steep ice steps to join the buttress and easy ground above. The high quality of the route and the novelty of unexpectedly finding an unclimbed fat bit of ice was pretty cool. The name Spectacula (VI,6) was the original Roman name for an amphitheatre. We decided to abseil the route which allowed us to climb Icicle Factory straight after.

In the guidebook Icicle Factory is given old school Grade V with no technical grade [the first ascent was made by Mick Fowler and Victor Saunders in March 1986], but personal experience has taught me this means it’s probably nails and at least Grade VII! I was surprised after three perfect pitches for it to have been very straightforward and probably V/VI,6 on the Day. Conditions really were exceptional with first time placements for the whole route. We topped out this time and traversed a section of the ridge watching the sunset before heading back down.

On Sunday (February 28), old school friend Lea MacLeod and I made the first ascent of Spirulina (V,5). Lea is very fit from trail running but his only other climbing experience was seconding Vulcan Wall this summer.  I’d spotted this steep ice streak, which lies to the left of Icicle Factory, the day before. Conditions were still perfect and the climbing superb. It would be a three star classic even if it was situated on Ben Nevis. Not a bad first experience of winter climbing for Lea. After we got back down to the snow line, we were sorting gear and Lea produced two spirulina and banana smoothies he had made. I hadn’t heard of spirulina before, it’s an algae in powder form that you just add water too. Lea hadn’t considered that it would freeze and we had an entertaining time trying to get it out of the flask it was in.

All in all it was a pretty good week. I could have easily spent another three days climbing new routes in the Amphitheatre alone if the weather had held, as there was ice all over the place.“

1 Response to A Good Week