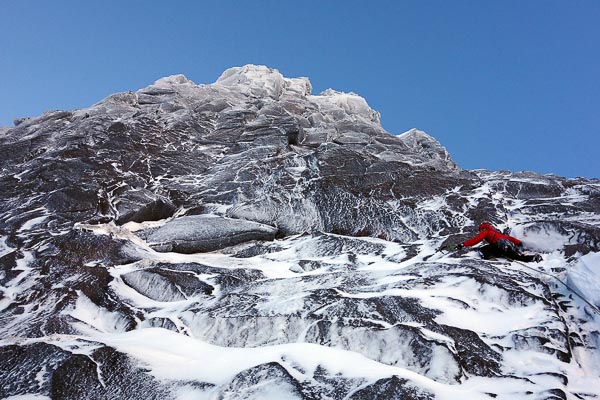 Kenton Cool on the second pitch of The Needle (VIII,8) on The Shelter Stone. This iconic route in the Loch Avon Basin was first climbed in winter by Andy Nisbet and Colin MacLean in February 1985. Thirty years on it still retains its reputation as one of Scotland’s most sought after and demanding winter routes. (Photo Ian Parnell)

Last week saw one of the standout events of the season when The Needle (VIII,8) on the Shelter Stone was ascended on consecutive days. Ian Parnell and Kenton Cool climbed the route on January 8, and the following day, Andy Inglis and Neil Adams also made an ascent.

“It was my second route of the season after the short one I did with Dave Almond in the Corries,” Ian explained. “It was also Kenton’s first of the season and it told in terms of mental fitness once night descended at the Needle Crack, where I ended up aiding a quarter of the pitch. Having said that I gave it all I had and it was a fantastic day in so many ways, but perhaps most because I’d almost dismissed the idea of the harder routes on Shelter Stone being proper winter routes. For some reason, perhaps influenced by the chat in the 90s that it was almost impossible to get the cliff fully in condition, I’d avoided that part of the cliff.

I’d been in contact all week with visiting Americans Steve House, Josh Wharton and Mikey Schaefer and so had a good idea that close up conditions were a lot more wintery than some reports were suggesting. With mine and Kenton’s day fixed as Friday to fit round our family commitments we were super lucky to have Thursday completing the conditions set up with all day snow and 80mph winds followed by the blue sky calm on Friday. We left the car at 4.45am and after breaking trail started climbing at 8.15am, we diagonalled in from Clach Dhian Chimney area, climbed the Steeple layback rather than the Crack for Thin Fingers mainly as we got a bit lost as the snow was making the footless ramp pitch look very different from the photos I had. We reached the bottom of the Needle Crack at twilight at which point the verglas, my lack of wide gear, and mental exhaustion (lots of excuses!) meant I ended up aiding the middle section of the pitch eventually climbing the 3-4 inch crack in the left wall to a ledge from where I could free climb up the arête. We then lost even more time trying to thread the eye of the needle which after Kenton had dug out the through tunnel he failed to get his chest through – Kenton goes to the gym a lot but he’s a lot slimmer than I am. My guess is we topped out about 9.30pm and were back at the car just after midnight. Despite my failure on the Needle Crack it was one of my most enjoyable days out and the hardest day I’ve had for a while. Guy [Robertson] reckons the route should be IX,8 as the crux is at the top and I agree. In the fully hoared up conditions we had I think the route is one of the best in Scotland!”

The strong Scottish based team of Andy Inglis and Neil Adams had a similarly fulfilling eperience. “Neil and I had been eyeing up the forecast for most of the week, swithering on whether the crag would be absolutely buried,” Andy told me. “A prospect I could quite believe judging by the monsoon last week which for a while made escaping Aberdeenshire on the Friday night rather ‘challenging’! Our guesswork paid off, the forecast played ball with a stunning morning on Saturday, and some decent blokes had even stuck in a trail down Pinnacle Gully for us. As it happened, they seemed to also have also put in tracks up the route too, which was a bit of surprise and we spent much of the day guessing who it might have been! As for the route…. long, very sustained and high quality with the crux right at the top, which Neil dispatched in style (I assume, as it was dark by then unsurprisingly!) Its incredibly fulfilling to eventually climb a route that you spend years dreaming about, training for, watching the forecast and conditions for… and it all coming together… in many ways it was the essence of Scottish winter climbing.”

Regarding Ian’s comment on the grade, Andy commented: “Neil led the crux so he is probably better placed to say, but I think The Needle is so sustained and situated in a serious a place to climb, that suggesting it has the same overall grade as stuff like Sioux Wall, The Gathering and The Secret (just for instance) is Bonkers. For me it was like doing a long mid grade VIII,8 into the 1st pitch of Unicorn, so I can understand Guy’s logic for his suggested grade of IX,8. Without question it’s a four star route though!”