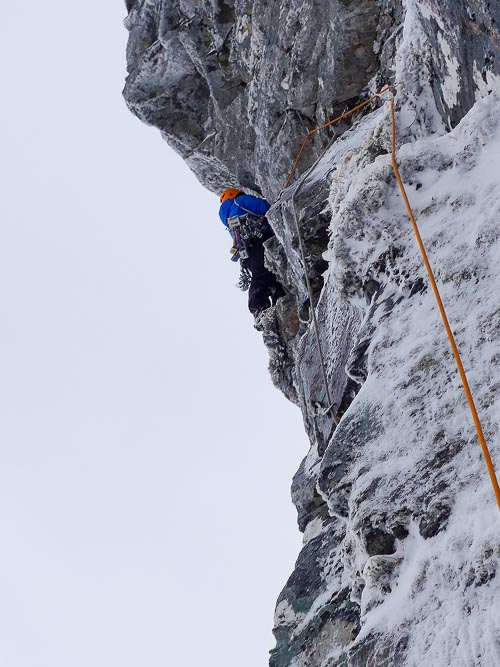 Simon Richardson about to pull into the overhanging offwidth during the first ascent of The Day After Tomorrow (VII,8) on Creag Meagaidh. This sustained six-pitch outing is the most difficult of three mixed routes added to Coire Choille-rais earlier this month. (Photo Roger Everett)

Several years ago I had a pleasant morning climbing the East Ridge of Mheall Coire Choille-rais, an excellent Grade II on the south side of Creag Meagaidh. Looking north I could see the profile of a prominent buttress in the neighbouring Coire Choille-rais, but the cornices were too big that day to get a closer look. I was sufficiently intrigued to make a visit the following summer, and sure enough, situated at the north-west end of the corrie was an attractive triangular buttress about 150m high. As I approached closer however, my heart sank, as a direct ascent was defended by an impregnable-looking vertical wall. The mica schist looked particularly unhelpful and the only hope of an ascent appeared to be on the flanks, which avoided the main challenge of the feature.

Although Coire Choille-rais does not appear in any guidebooks, folk have climbed there for many years. Mick Tighe made a cryptic reference to several ice routes in an article in Climber magazine about 20 years ago, and the SAIS avalanche boys have climbed ice routes on the back wall of the corrie and even promoted the venue on their Creag Meagaidh blog. Guides have used the corrie for ice climbing instruction, and there is an attractive looking two-tiered icefall that has been climbed at Grade III. Nothing has ever been formally recorded however, which is why it doesn’t feature in any guidebooks. To my knowledge, the triangular buttress, which is known locally as the Aisre-Chaim, had never been climbed in winter although Doug Evans (first ascent of Quartzvein Scoop, Beinn Udlaidh) ascended it via a Moderate scramble many years ago. His route was described as mainly vegetation rather than rock, so I presume Doug climbed the right-hand edge, which is spoilt in winter by ever-easy ground to the right.

The buttress came to mind on January 6 when Henning Wackerhage and I were looking for somewhere to climb after the post New Year thaw. Snow was falling on unfrozen ground in both the East and West, but Creag Meagaidh was in a shadow avoiding the heaviest snow, and I reckoned that the gale force easterlies would have cooled the buttress and frozen the turf. We left the car in the rain, and there was no sign of any snow for much of the walk in, but as we rounded the corrie lip, the grass stated to glisten with frozen dew and our buttress appeared out of the mist frosted and white.

I’d studied my summer photos long and hard before we left, and realised that there was a natural line of weakness that cut into the centre of the buttress from the left above the lower ‘impregnable’ wall, and lead to the buttress crest. The plan worked perfectly – the turf was frozen and the line wound its way through some spectacular scenery and was pleasantly sustained. Two long 50m pitches took us to the final 60m-long pitch up the summit crest. It was Henning’s Birthday so Birthday Route (IV,4) was an appropriate name. But most importantly the rock has been friendly and taken gear readily, so perhaps the ‘impregnable’ wall was possible after all?

Three days later I was back with Roger Everett on January 9. The weather was perfect, so we had no excuses not to try a direct line up the ‘impregnable’ wall. Knowing a little more about the nature of the rock I’d spotted a cunning line that followed a narrow ramp across an impending wall into an overhanging offwidth. The moves up to the ramp were bold and unprotected, but the turf was perfect and I pushed on. Unfortunately the ramp was holdless and far steeper than it looked from below but a good hook lured me leftwards across the undercut wall below. I was now only a couple of metres away from the base of the offwidth, and two very strenuous moves later I was frantically trying to find a placement at its base.

Unfortunately the turf was of the straggly rooted variety, and overhanging turf rarely makes for good placements anyway. After a couple of attempts my options had run out, but as I prepared myself for the inevitable fall I couldn’t bring myself to let go, so I decided to have one more go. A superman effort allowed me to reach a slightly higher turf placement in the crack and with nothing to lose I laybacked against a single crampon point hold on the impending wall and managed to gain a curious jutting out ledge of turf. One by one, my large gear slotted into the overhanging offwidth above and with some relief I pulled onto the belay ledge.

The next pitch was steep, but had good cracks, but we nearly came to an impasse on the third pitch that barred access to a vertical corner that cut though the centre of the face. The climbing was easy enough to the base of the corner but it was defended by an undercut wall. There was no protection up to this point, which meant the price of failure was a 30m fall straight onto the belay. A flared slot in the roof to the right may have taken a cam but it was filled with ice. After innumerable sorties by both of us, I eventually plucked up the courage to make the strenuous Tech 7 moves in to the base of the corner. It was now dark, and the corner proved steeper and more sustained than it looked, but eventually it lead into the upper buttress. Two more long pitches eventually joined the upper section of the route I’d climbed with Henning three days before.

We made it back to the car at 10pm. Prompted by the climate science disaster film, we called the route The Day After Tomorrow because as we climbed Lochan Choille-rais froze over and was transformed from rippling water, to snow-covered ice. As for the grade, the first pitch was VII,8 in its own right, but the seriousness third ‘death’ pitch would be negated by a good cam placement so we decided not to factor that into the rating.

The line of corners cutting into the left flank of the buttress cried out to be climbed to complete the job. On January 12, Pat Ingram joined me for the first ascent of Cat Burglar, a fine V,5 with a memorable crawling section to link the two upper corners. By then a week of snowfall had covered the buttress in deep powder and the route was only really possible because I’d remembered the whereabouts of the crucial turf sections from the previous ascents.

All in all, it had been a good week’s work.