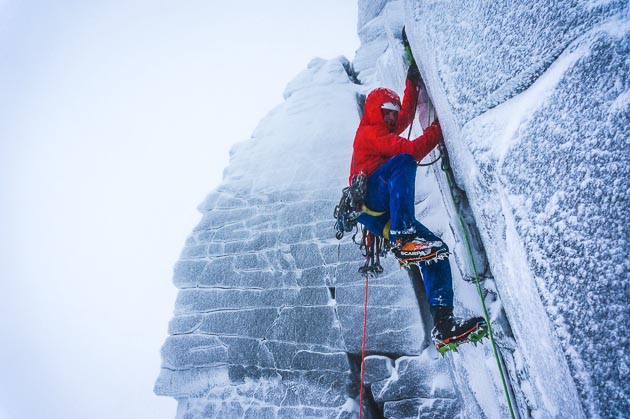 Visiting US climber Josh Wharton on the second pitch of Daddy Longlegs (VIII,9) in Coire an Lochain in the Northern Corries. Over the course of eight stormy days in early January, Steve House, Josh Wharton and Mikey Schaefer notched up one of the most impressive collections of high standard routes ever seen from an overseas team. (Photo Mikey Schaefer)

“It’s always great to see visiting climbers enjoying the Scottish winter, and early January saw just that,” Simon Yearsley writes. “I picked up US climbers Josh Wharton and Mikey Schaefer from Edinburgh Airport on January 2 and spent the evening at our house pointing at maps and guidebooks and generally building the psyche. What then happened over the next eight days was pretty cool: Josh and Mikey set off in one of our campervans, soon joined by Steve House and between them they dispatched eight routes in a really smooth style over six days climbing with two rest days. There were two things which for me made the trip really stand out: the weather and conditions definitely weren’t at their best (Josh did say he nearly cried on several occasions the weather was so gnarly!) but they still managed to get out; and also they were pretty self-sufficient for the whole trip, unlike many other top-flight visiting teams who’ve tended to have lots of support and folk to go out with them on the hill. Yes, they had lots of online support from various folk including me, Ian Parnell and others, but they were really operating on their own with only Steve having been in Scotland once before, many years ago on a BMC Winter Meet.

I asked Josh to pen a quick resume of their trip, which makes interesting reading. The only thing I’d add for context is that whilst they climbed in the Northern Corries and on Ben Nevis, they were really psyched and determined to hit the more remote locations – how frustrating for them to have the weather they had, and I really hated texting Josh so tell him that no, Giant’s Wall would not be in nick with a freezing level of 850m!

It’s good to see that Scotland’s winter climbing has such a big impact on top flight team. All we need now is another 30+ visiting climbers here for a week… roll on the 2016 BMC International Winter Meet next week!”

Scotland has a well-deserved reputation as a stronghold of traditional mixed climbing, so Mikey Schaefer, Steve House, and I arrived excited to get a taste of the winter scene. Here’s a trip report of what we got up to:

January 3: On our first day we walked into the Northern Corries in driving rain, low visibility, and the occasional knockdown gust. A fine introduction to Scottish misery… or is it fun? At the small lochs everything went white, and the cliffs, as best we could see them, were covered in thick slush. Judging ‘Nick’ to be in full effect, we climbed Fallout Corner (VI,7). It felt like well-protected M5, climbed in a snowy blender.

January 4: Again, it was driving rain at the car, with horrendous winds and low visibility; a little like post-holing out to climb in a nasty Patagonian Storm. We headed for Daddy Longlegs (VIII,9). There was significant snow, and avalanches were rumbling about the corrie. As we racked up a sizable avalanche came down The Vent, inconveniently just as Mikey was changing layers. His pack and gear was shellacked with wet snow, and he received a very cold snow shower.  After a bit of fumbling around to get re-sorted and warmed up, we picked a different spot to belay. Daddy Longlegs proved quite fun. It was covered in slush, and it was difficult to look up in the deluge of snow, but at least the cams worked. Seemed like spicy M6+. We rapped the route to avoid any more avalanches.  I’d ordinarily consider seven to eight hours of walking, and 3.5 pitches in two days pretty pathetic, but in this case Mikey and I were pleased with our efforts.

January 5: Rest Day. We collected Steve at the Edinburgh airport in the evening, and made a late night drive to Ben Nevis.

January 6: We left the parking lot a bit after 7am, dropped some kit and had a brew at the CIC Hut, and headed to the Number Three Gully Buttress for Knucklebuster (VIII,9). Conditions were a little kinder, and colder, so it was decidedly less miserable. Although it was still properly winter, with blowing snow and low visibility. On this day, I realized that locals actually do pay attention to the forecast. Suddenly there were lots of people out climbing. Knucklebuster (I believe we climbed the ‘Direct’ version) was the best route of the trip; enjoyable thoughtful climbing, aesthetic features, some sticky ice in the corners, and comfortable belay spots! Again, not super hard technically, perhaps easy M7, but often spicy. We almost missed the descent down the Number Three Gully, but Steve’s phone saved the day.

January 7: After a lovely night in the hut we headed for The Secret (VIII,9). It was nasty again, although not as wet, and no one was out. Things rimed up considerably overnight. We fixed a line so Mikey could take some photos, and I led the route in one long pitch. The rime, and verglass was very thick, and it was extremely difficult to see the hooks and feet, or get any quality protection. Cams were completely useless, and with only four hexes, and a limited knowledge of how to place them, it felt especially spicy. I climbed at a crawl to make sure I didn’t fuck up. Cool climb, but a bit hard to enjoy given the conditions. Next we soloed out across ledges to the base of the chimney pitch on Darth Vader (VII,7). Steve led to top in one big pitch. Good fun.

January 8: The weather was gorgeous and clear, so of course we decided to take a rest day. We joked that there’s no point in climbing when Nick is in such a good mood! With the clear weather it was nice to finally see the mountain and a bit of the countryside. We weren’t sure where conditions would be good, so we opted to head back to the Northern Corries.

January 9: We started into the Corries in clear, cold weather. How nice! I hoped to try the Hurting, but could see from a distance, that it was heavily rimed. So we made a spur of the moment decision to go to the Ventricle (VII,8). It proved tricky, and covered in lots of powder snow. Steve put in a nice, epic effort; climbing to the ledge in one big pitch. Despite the grade, this pitch seemed like one of the trickiest of the trip. I’d say proper M7R. I climbed the second pitch to the right of the slot via mostly ‘hero’ hooking in heavy rime. Good times, but a surprisingly long day.

January 10: Hopeful to go big on our last day, we set the alarm for a painful 4am; packed for the Citadel (VII,8) on The Shelter Stone. Unfortunately we had used up our mojo, and went back to sleep when the alarm sounded. We salvaged the day by climbing the Genie (V,7) and Magic Crack (VII,7). Fun, good quality routes, and there was a nice big track into the corrie for a change. I headed over to The Hurting (XI,11) at the end of the day, just to have a look. It was completely covered by 4 to 8 inches of rime. Since it was our last day, I dropped a line and tried it on Mini-Traxion anyway. I managed to climb the first half of the route by using fins of rime as handholds, unique! After that, it was too steep and fragile to climb the rime with my hands, and the rock features were buried. Another trip I guess!