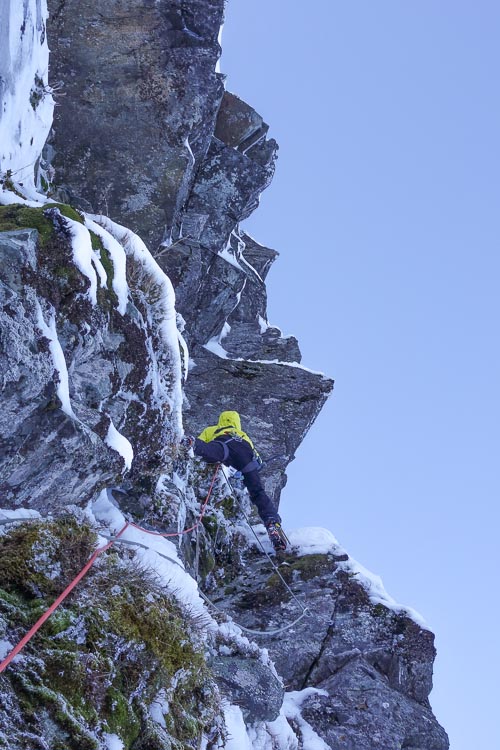 Simon Yearsley on the second pitch of Spooks (VI,6) on Craig na Caillich on Meall nan Tarmachan. This cliff has a long history and was first climbed by Raeburn and Lawson in February 1898 by an indirect version of Great Gully that nowadays carries a IV,4 rating. (Photo Simon Richardson)

On January 14, Simon Yearsley and I added a new route we called Spooks (VI,6) to Meall nan Tarmachan in the Southern Highlands. Simon takes up the story:

“Simon and I have known each other, and known of each other, for many years. In fact we probably first met in Snell’s Field in Chamonix in 1983, when the ever-enthusiastic, and sadly late, Mark Miller was bemoaning the fact there were ‘Too many Simons in Chamonix!’ Despite that, we’ve never actually climbed together. Simon rang me to say he had a guidebook meeting near Stirling at 7.30pm in a couple of days time, and so did I fancy breaking the habit of the past 33 years and actually teaming up for the day. A fine idea.  With a bit of time pressure and a lot of snow high up, we opted to check out Creag na Caillich. This modest looking east-facing crag just west of the popular Munro Meall nan Tarmachan has a base around 670m so should have escaped the worst of the snowfall and was nicely close to the road.

We had expected a bit of a ‘powder wade’ to reach the crag but were pleasantly surprised by good enough travel, with deeper snow only in the last bouldery section below the cliff. I often find crags like this hard to judge, as on first glance it looked pretty easy angled and very vegetated with few really compelling lines. Simon was more optimistic, as he’d stood underneath it in summer, and assured me it was a) steeper than it looked, and b) contained a good looking line to the right of the prominent corner of Momento Mori. He was, of course, absolutely correct.

Simon took the honours on the first pitch with an innocuous wee groove proving much harder than it looked, then a long vertical section on blobs of turf leading to a fine exposed belay. At one point, Simon’s feet skittered off and there was a momentary yelp as he regained control. Following Simon, I was struck by how insecure and spooky the 55m-long pitch must have been to lead.

The second pitch was somewhat easier, but very spectacular, as a short groove then an exhilarating swing right round an arête led to a turfy ramp system cutting above the steep section of the crag. The swing round the arête was great fun, the position on the ramp was excellent, and it felt like we were on a bigger and more majestic cliff. An easy pitch led to the top and we scuttled back to sacks before the light faded.

It was great fun to finally climb together and won’t be the last time either! Oh, the guidebook meeting – Simon did get there, albeit a wee bit late, but with a hopefully good enough excuse!”