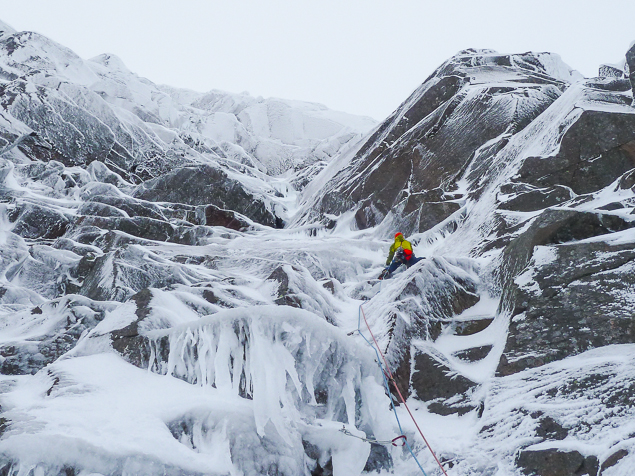 Uisdean Hawthorn on the first pitch of Vapouriser (VIII,8) on Central Gully Wall on Creag an Dubh Loch. This impressive icy mixed route takes a counter-diagonal line to Vertigo Wall and was first climbed by Guy Robertson and Greg Boswell in December 2012. (Photo Tom Livingstone)

Uisdean Hawthorn and Tom Livingstone pulled off an important second ascent on January 16 when they repeated Vapouriser (VIII,8) on Creag an Dubh Loch in the Southern Cairngorms.

“Tom didn’t arrive in Perth until 10:30pm,” Uisdean explained. “I had been thinking of going to the North-West but it was a bit late to be driving all that way. This was good, it gave me an excuse to tell Tom that the Dubh Loch was the only option, and I tried to say with confidence that Vapouriser would be in condition and we had other options if not. Guy [Robertson] and Adam [Russell] had been in, and made impressive, but unfortunately unsuccessful, attempt to repeat The Giant. If there was ice on that, and with all the rain on the East Coast, there would be a fair chance other things would be good.

Despite sleeping through an alarm and not leaving Perth until 5.30, we made it to the crag by 10.30 am.  I was expecting a wade through deep snow however, it wasn’t to bad as the loch had frozen and the wind had consolidated some of the snow the day before.

We arrived at base of Vapouriser and I was pleasantly surprised at how fat it looked, but we both did think it looked a little unconsolidated. On the first pitch I discovered it was very unconsolidated and with sections unattached to the rock, resulting in a serious two hour lead to climb 40m, with a lot of ice coming of and doing its best to hit Tom belaying below. Another cruddy ice pitch and a very spicy bit of ledge crawling on to another ice smear led us to the diving board belay with Tom leading up the slot above missing out on both the ‘wild exposure’ as it was know dark and the ‘good gear’ as it was icy. We stood on the top at 8pm with not a breath of wind and the outline of the loch far below and both felt very satisfied. It was Tom’s first route of the season and my third big route on Central Gully Wall. Only one more in the middle left to do!”

Simon Richardson is a passionate Scottish winter climber
View all posts by Simon Richardson →
This entry was posted in Repeats and tagged Creag an Dubh Loch, Tom Livingstone, Uisdean Hawthorn. Bookmark the permalink.