Two Repeats for Shoot The Breeze 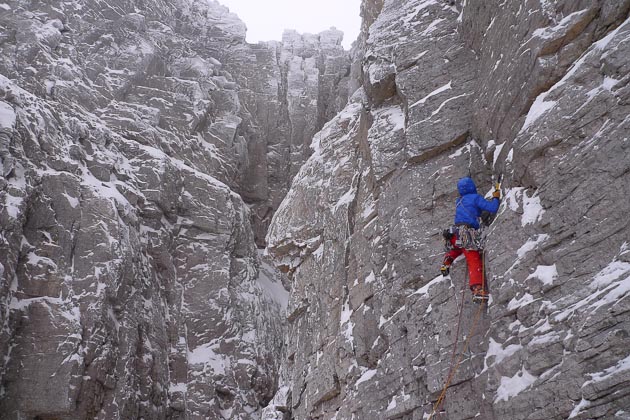 Andy Inglis on the first pitch of Shoot the Breeze (IX,8) on Beinn Eighe during the second ascent. This sustained and spectacular route was first climbed in winter by Guy Robertson and Greg Boswell in January 2013 and is destined to become a modern classic. (Photo Iain Small)

On January 16, Andy Inglis , Murdoch Jamieson and Iain Small made the second ascent Shoot the Breeze (IX,9) on Beinn Eighe’s West Central Wall. This sensationally positioned route rose to prominence last year last year when it was featured in the book The Great Mountain Crags of Scotland.

“We climbed as a three so we each got a good pitch,” Iain explained. “Andy had the first that was great climbing up a steep corner-crack, well protected but a stiff pull. I got the second pitch gaining the arête, which felt pretty intimidating as wasn’t really sure at what point to actually commit onto the arête. Murdo got the incredibly steep out there third pitch and was in his element, and there were none of his usual ‘ledge shuffling’ complaints! Andy then did a quick easier pitch to top out. The snow showers during the day had cleared and the new moon was shining so there were some great views and we could walk out without the head torches.”

The route saw its third ascent in the hands of Uisdean Hawthorn and Tom Livingstone on January 19 who were both full of praise for the quality of the route.