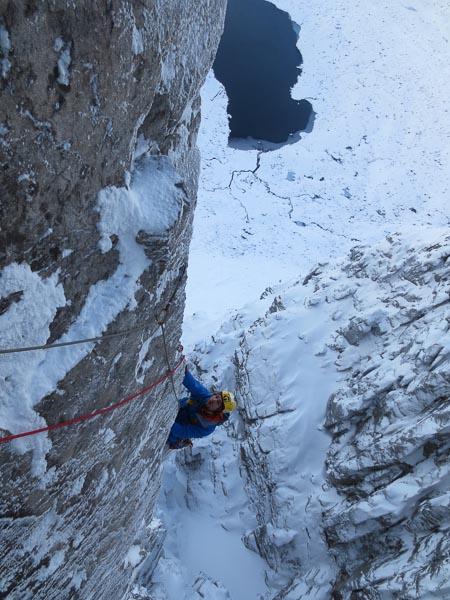 Guy Robertson and Greg Boswell made the first winter ascent of Shoot the Breeze on Beinn Eighe’s West Central Wall yesterday (January 15). This spectacular summer E2 was first climbed by Andy Nisbet and Gill Ollerhead in May 1992. The SMC Northern Highlands South guidebook describes it as ‘a stunning route, one of the wildest in Scotland, with well protected crux and a Troll Wall ambiance.’ A perfect objective then, for the all-conquering Robertson-Boswell team!

”It was a truly outstanding route climbed in probably the best mixed conditions I’ve encountered up there,“ Guy told me.  “As there’s not much in the way of turf on this route, and very little ice, it really needs to be properly plastered to justify a winter attempt.  The whole wall was white from top to bottom, which I’ve never seen before, so all the thundering rain on the tent the night before was exactly what was needed.  I’m not sure about the grade – possibly a soft IX,8 – it’s a tricky one for sure.  Pretty much every move was Tech 8 after the first few metres, and the protection was generally superb.  However, there was a very precarious section above a poor Pecker at about 20m on pitch 2 where a fall would probably have broken something, so maybe IX is right.  Who cares – it’s the quality that counts and this one is reeking of it!”