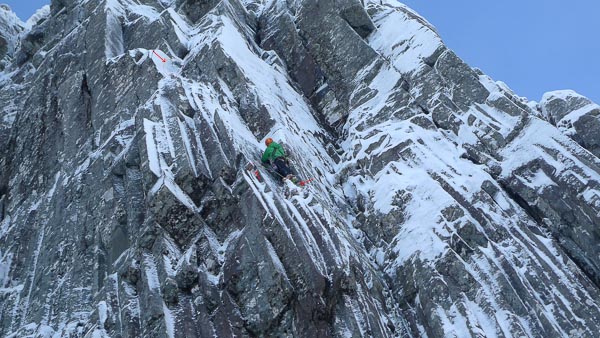 Adam Hughes climbing the serious and runout first pitch of Scrabble (VIII,7) in Stob Coire nan Lochan during the second ascent. The spike at Hughes’ feet and cam in a flared crack at knee height are circled. There is no more protection from this point until the belay marked by the circle and arrow. (Photo diagram Adam Hughes)

Yesterday (January 15), Adam Hughes, Matt Stygall and Blair Fyffe made the second ascent of Scrabble (VIII,7) on Stob Coire nan Lochan in Glen Coe. This fabled route was fist climbed by Mike ‘Twid’ Turner and Louise Thomas in February 2000. Adam led the first (crux) pitch which is technically sustained and serious once you step left from Central Grooves and into the hanging groove of Scrabble.

“The guidebook suggests you may be rewarded with at least one good runner in the groove, but this was not the case,” Adam told me. “Once I left the spike runner by my feet at the base of the groove, it was sustained and thin Tech 7 climbing all the way to small ledge, which is gained once you move left at the top of the groove with committing moves to get stood on it. I did manage to place a bulldog near the top of the groove, but once Matt gave it a wiggle, it sort of fell out!”

Adam belayed on this ledge, as it would have been very cramped at the belay under the prominent roof used by the first ascensionists “This did actually make a better length second pitch that even had gear, “ Adam explained. “Blair led this which felt like VII,7’ish. Matt then romped up the final pitch which was a pleasure to climb, on good hooks and in a great position, VI,6.  We shortened this pitch to 30m, which meant that it was one 60m ropelength to the top up East Face Route. Chatting about grade afterwards, Matt and I thought VIII,7 seemed right, but it is hard 7. Blair thought VIII,8, and I can sort of see it, as the climbing on Central Grooves was easier, but I think that the current grade really highlights it serious nature.”

Incidentally, Twid and Louise shared leads on the first ascent 13 years ago. Louise’s ascent is thought to be one of the hardest Scottish winter leads by a woman, and probably not equalled until Ines Papert’s ascent of Unicorn in 2010.