Posted on November 21, 2014 by Simon Richardson 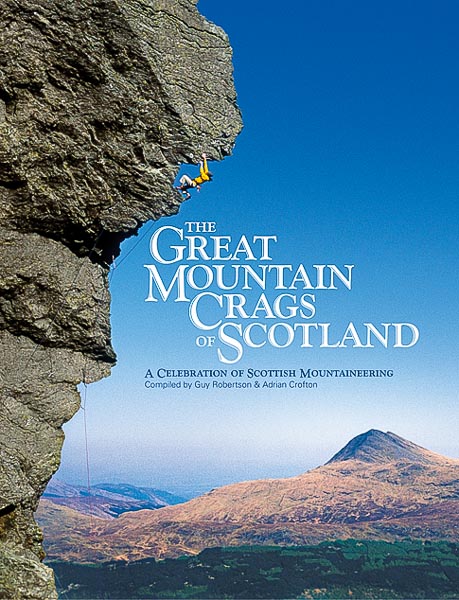 The Great Mountain Crags of Scotland, compiled by Guy Robertson and Adrian Crofton, has just been published by Vertebrate Publishing. It is one of the most significant books about British climbing to be produced in recent years. The cover photo shows Dave MacLeod climbing Dalriada (E7) on The Cobbler. (Photo Dave Cuthbertson)

This is an inspirational book.

Guy Robertson and Adrian Crofton have compiled contributions from 25 authors describing 33 of the most significant mountain crags in the Scottish Highlands and Islands. The book is published in large format and illustrated with many action shots and outstanding landscape photographs by Colin Threlfall and Dave Cuthbertson, resulting in a lavish celebration of Scottish summer and winter climbing. The chapters describe the nature and character of the crag together with a brief recent climbing history and a ‘Story’ by the author on their individual experience. Guy and Adrian state in their Introduction that “many of the climbers have enjoyed extended love affairs with the crags they describe” and the resulting writing shines through as authoritative, and sometimes very personal too. This makes for compulsive reading, and it is hard to put the book down as all too quickly you are swept away to the sharp end of a long and lonely lead high in the Scottish mountains.

When Guy gave me the brief to write one the chapters (the Fhidhleir’s Nose), I was a little concerned that the standard of climbing to be described in the book was too high. Many of Scotland’s recent cutting edge routes are highlighted, and to complete the full list you would need to be proficient at Grade IX and E8. The secret of success for the likes of Hard Rock and Cold Climbs was that the routes were just about accessible for the climbers of the day, however The Great Mountain Crags of Scotland addresses a different remit. Although three or four routes are highlighted in each chapter, the purpose of the book is to portray the nature of the cliffs and the character of the climbing rather than presenting a simple tick list of climbs. In a similar way to Cold Climbs and Hard Rock however, I suspect in the coming decades many of the harder routes mentioned will become well-travelled. But more importantly, my worry that the book would be too inaccessible is dispelled by the nature of the writing. Rather than take an elitist stance, the authors have written in a ‘you can do it too’ style, which is as refreshing as it is engaging.

I have no doubt that The Great Mountain Crags of Scotland will play a part in updating the broader perception of Scottish climbing and stand as an important historical record. The developments in the Scottish mountains over the last couple of decades have largely gone under the radar screen, which is surprising, as arguably the Scottish Highlands and Islands are the most exciting adventure climbing playground in the British Isles. Whilst the Scottish Mountaineering Club Journal has painstakingly recorded new route descriptions, and magazine and journal news reports have attempted to put some of these routes into context, many will be unaware of the quiet climbing revolution that has been taking place north of the border. The majority of the accounts in the book would have merited a contemporary magazine article in themselves, but with the exception of one or two routes that have been described on this blog or reported on UKC, most have passed unnoticed. This is probably how many of the climbers involved would have wanted it, but it is fortunate that they have now taken up the opportunity to recount their experiences, so a flavour of the last 20 years of Scottish climbing history has been preserved for posterity.

In their Introduction, Guy and Adrian state their aim is to inspire the next generation. There is no doubt that The Great Mountain Crags of Scotland will succeed in doing this. Congratulations to all who contributed and for Vertebrate Publishing for their commitment and for delivering such an outstanding production. The publication of books like this is a rare event, so if you have a strong interest in Scottish trad climbing, be sure to get yourself a copy.