The Cuillin of Rum

Posted on November 29, 2014 by Simon Richardson 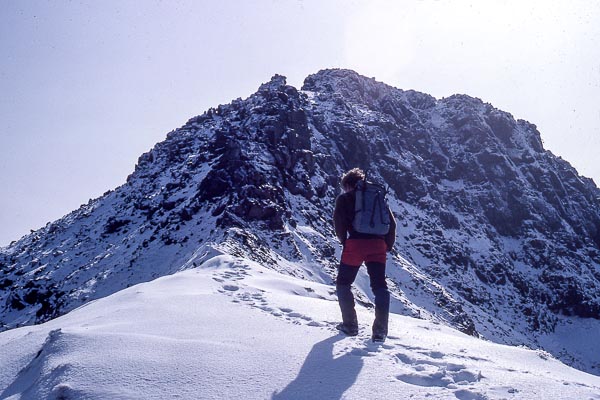 John Dalton making a rare winter traverse (III) of the Rum Cuillin in 1983. Awkward access, low altitude and the transitory nature of cold conditions means that planning winter mountaineering on the Scottish Islands in advance, is an almost impossible task. (Photo Iain Young)

Soon after the new SMC guidebook Inner Hebrides and Arran was published, Iain Young contacted me about the Rum Cuillin in winter.

“Back in early spring 1983, John Dalton and I traversed the full Rum Cuillin ridge in pretty much full winter nick, “ Iain explained. “John and I were on the island for a week doing geology field work (I did much of my PhD research there) and were staying in one of the bothies around Kinloch Castle. After getting to bed one foul, wet and cold night we woke to one of those all too rare, perfect, West Highland mornings – cold, clear and a hard frost – and to see plastered hills. We immediately gave up on the idea of ‘work’ and set out on a traverse of the ridge under snow.

Conditions were close to perfect – light rime, plenty of snow, no neve, frequent verglas, snow down to just below the level of the Trallval-Ainshval col. We weren’t burdened with axes, crampons or rope, but I’d done the ridge twice before in summer, and the Hallival-Askival section probably twice more, so we were armed with quite some knowledge of the holds! Starting on Barkeval, everything was taken direct as per the classic summer traverse (I recall one exciting section on the Askival  pinnacle where a combination of melting off, and prising verglas from, little holds with my fingers was required – and the tricky little slab on the way up Ainshval was also thought-provoking), though I am not sure whether or not we went to the West top of Trallval which is off of the main ridge line.

Overall, we thought it was technically harder than the Aonach Eagach or Curved Ridge, though much  escapable – perhaps akin in difficulty to Castle Ridge on the Ben in winter. Crampons etc. would certainly have made the tricky parts much, much easier and much more secure… A fantastic and rather unique day out –  given the difficulty in getting there, it would be very hard to plan for such a thing.”

Aside from the Skye Ridge, winter ascents of Scotland’s major ridge lines have not been systematically recorded, so it would be interesting to know if anyone else has had the rare good fortune to make a winter traverse of the Rum Cuillin.

Simon Richardson is a passionate Scottish winter climber
View all posts by Simon Richardson →
This entry was posted in Commentary and tagged Iain Young, John Dalton, Rum. Bookmark the permalink.