Posted on December 6, 2014 by Simon Richardson 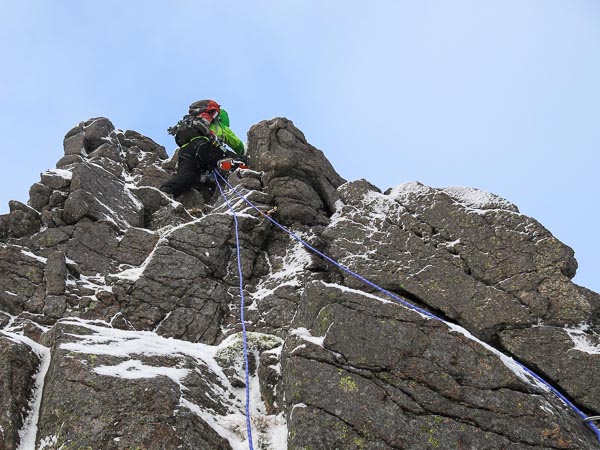 Roger Everett on the first ascent of Rumbling Ridge (III,4) on Braeriach. Rocky ridges make good early season routes as their relatively low angle means they collect snow and they do not rely on frozen turf. (Photo Simon Richardson)

After a very warm November, the winter season season finally got underway in the first week of December as westerly winds brought snow to the higher tops. As usual, The Northern Corries were the most popular venue and there were ascents of The Message, Pot of Gold, Hidden Chimney and Invernookie in Coire an t-Sneachda, and over in Coire an Lochain, Savage Slit and Ewen Buttress also saw ascents.

Over on Skye, Mike Lates, Jamie Bankhead and Iain Murray made an ascent of BC Buttress on Sgurr Thearlaich. This relatively high altitude crag overlooking the Great Stone Shoot comes into condition very fast, and the trio found an alternative start which brought the grade down from IV,5 to IV,4.

Finally on December 5, Roger Everett and I added to our collection of obscure routes on the north side of Braeriach with the first ascent of the three-pitch Rumbling Ridge (III,4). This provided a good early season excursion to blow away the autumn cobwebs. The name refers to the rickety second pitch, which is a lot more solid after Roger trundled a series of stacked blocks.

With storms and blizzards forecast for the next few days, it looks like winter has now well and truly arrived!