Posted on December 10, 2014 by Simon Richardson 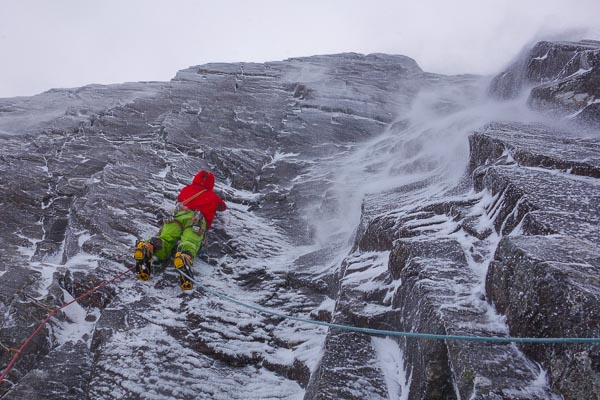 Andy Inglis on the second pitch of Tomahawk Crack (VIII,9) on Number Three Gully Buttress on Ben Nevis. The third pitch continues up the narrow crack at the top of the picture in line with Andy’s helmet. (Photo Will Sim)

Will Sim and Andy Inglis enjoyed an excellent two days on the Ben at the beginning of this week. On Sunday December 6 they made an ascent of Sidewinder (VII,7) on South Trident Buttress. This route has become popular in recent seasons and is good early in the winter as it is a pure snowed-up rock route. Their ascent was particularly impressive as Sunday was a wild and stormy day on the West, especially high up on Ben Nevis.

The main event took place on the following day (December 7) when Will and Andy made the second ascent of Tomahawk Crack (VIII,9). This futuristic-looking line to the right of Sioux Wall on Number Three Gully Buttress was first climbed by Greg Boswell and Adam Russell in November 2012.

“It’s a mega route and has the hallmarks of a future classic,” Will told me “Two hard pitches, the first thin, techy and run out and the second steep and pumpy – brilliant! A great find by Greg.”

Elsewhere on the Ben, activity has been slowly picking up with routes climbed lower down on the mountain such as Jacknife, The Great Chimney and the South-West Ridge of the Douglas Boulder – all sensible choices in the current wild and windy weather.

Simon Richardson is a passionate Scottish winter climber
View all posts by Simon Richardson →
This entry was posted in Repeats and tagged Andy Inglis, Ben Nevis, Will Sim. Bookmark the permalink.