Posted on December 3, 2012 by Simon Richardson 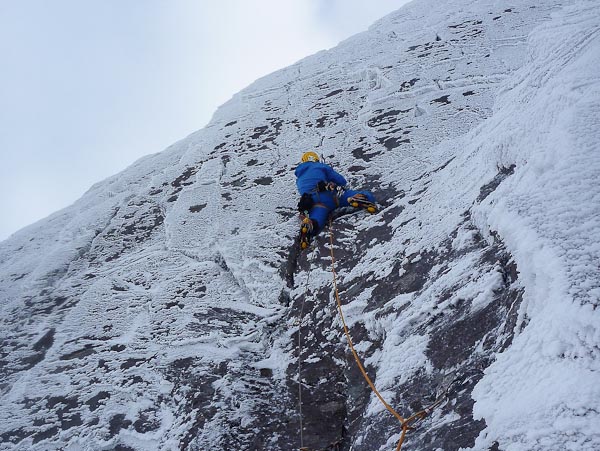 Greg Boswell on the first ascent of Tomahawk Crack (VIII,9) on the ‘Sioux Wall’ area on Number Three Gully Buttress on Ben Nevis. This wall is cut by a number of thin cracks and is ideally suited to modern mixed climbing. Part of the line of Sioux Wall, which is the most climbed Grade VIII in Scotland, can be seen on the left side of the photo. (Photo Adam Russell)

On Saturday I was looking across to the headwall on Number Three Gully Buttress and couldn’t help noticing a line cleaned through the hoar frost straight up the centre of the wall. I was intrigued, because I knew that Sioux Wall and Apache took lines up the left and right sides of the wall and nothing went up the middle, but all was revealed later in the day when I read an entry in the CIC hut book by Greg Boswell. On November 29 Greg and Adam Russell had indeed climbed a new route – Tomahawk Crack (VIII,9) – straight up the centre of the wall.

There was an email waiting for me when I returned home late last night. Greg had spotted a line of thin cracks when he made the second ascent of Apache last season. “It was an awesome line straight up the middle of the wall,” Greg wrote. “The route followed a technical wall to reach a steep and pumpy crack line for two main pitches. It was a funky route with some surprisingly steep and tricky sections.”

A full account appears on Greg’s blog, but there is no doubt that this is a very impressive route taking a futuristic line up one of the prime areas of winter real estate on Britain’s highest mountain. Furthermore it was climbed on sight at the first attempt and does not follow an existing summer line.

Greg comments on his blog that in his view Apache is VIII,8 and Sioux Wall should be graded VII,8. This is typical of many Nevis mixed routes, which become easier with repeat ascents as the cracks clean out. Whilst this may dent the ego of the first ascensionists (I have no doubt the Sioux Wall was a full-on VIII,8 when Ian Parnell and Olly Metherell made the first winter ascent in 2006), it has to be a good thing overall, because it opens up a larger number of Nevis mixed routes to a greater number of people.

Looking at Tomahawk Crack however, it seems unlikely that this line will drop a grade for many years to come. Congratulations Greg and Adam on a stupendous climb and for giving it a good name too!