Posted on November 30, 2012 by Simon Richardson 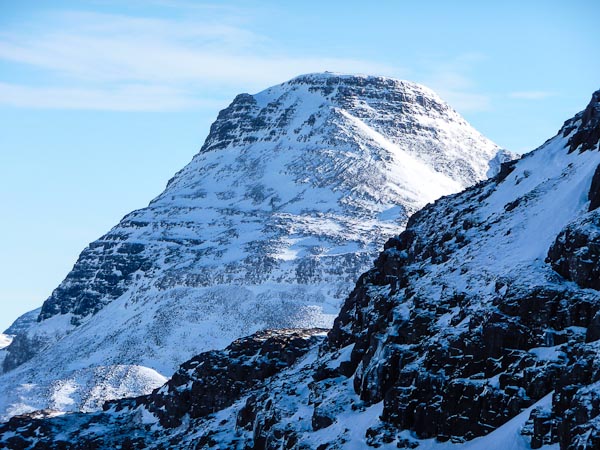 A distant shot of Maol Chean-dearg in the Northern Highlands showing the summit crag on the top left skyline. (Archive Photo Andy Nisbet)

With attention primarily focused on Ben Nevis and the Northern Cairngorms at the moment, it is refreshing to have news of a new route in the Northern Highlands by Andy Nisbet, Jonathan Preston and Pat Ingram on November 28. Andy takes up the story:

“After a day wading up The Message with insulated semi-frozen turf, I thought we ought to try somewhere with less snow but still high and exposed to the cold wind. The summit buttress of Maol Chean-dearg came to mind. You can approach from either Torridon or Glen Carron but we chose the latter as being more familiar. Pat Ingram, Jonathan Preston and I drove over to find a breeze and showers instead of the perfect day we hoped. We took 3.5 hours to reach the summit and then descended Hidden Gully to reach the crag. I soloed up a new Severe on the lower quartzite cliff a couple of summers ago and finished up the Moderate rib right of Hidden Gully so I could look at the cliff. I spotted a line of weakness, which I thought would freeze quickly, with the easier rib as an alternative if conditions were poor. I also knew that Hidden Gully was more like an easy Grade I than a II so would be fine as a descent.

Leaving my cag at home did rather throw me on a cold windy day so I also left my camera on the top, hence the lack of action shots. Once below the line, it did look rather steep, well plastered and the turf was only frozen where exposed (fortunately that was the hard bits), but we set off anyway and it turned out to be easier than I expected. Pat led the hard bit on the third pitch and we called it Bald Eagle (IV,4) – the hill being bald head shaped in the Gaelic. Jonathan and I nipped down at the end to climb the rib, which gave a pleasant Grade II.”