All Go in Coire n Ciste

Posted on November 29, 2012 by Simon Richardson 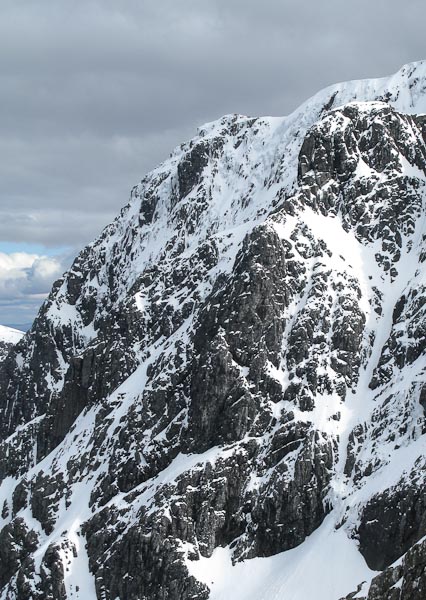 Looking across to Pinnacle Buttress of the Tower on Ben Nevis. This superb feature contains some of the finest Grade VI mixed climbing on the mountain. Stringfellow (VI,6) takes a zigzag line up the buttress, whilst Smooth Operator (VI,7) follows a line closer to the crest. (Archive Photo Simon Richardson)

The current spell of cold and snowy weather has resulted in some excellent ascents in Coire na Ciste on Ben Nevis. This corrie is ideally suited to early season mixed with routes mainly dependent on hooks and torques rather than frozen turf.

Many of the modern classics have had ascents such as Sioux Wall and Gargoyle Wall on Number Three Gully Buttress, Darth Vader and Lost the Place on Creag Coire na Ciste and Slab Climb and Sidewinder on South Trident Buttress. Over on Pinnacle Buttress of the Tower, Smooth Operator also had an early repeat.

The finest ascent of the week so far took place in Monday November 26 when Guy Robertson and Greg Boswell made the third ascent of The Knuckleduster (VIII,9) on Number Three Gully Buttress. Greg repeated this route last season with Will Sim (adding a more direct finish), but this time he returned with Guy to take a more direct (and natural) winter line on the summer crux pitch.

Their ascent was particularly remarkable as they only started climbing at 11.30am after being stymied by unstable snow conditions approaching a line in Observatory Gully. It is a significant journey from here to the foot of N3GB, especially in deep snow, and their success was underpinned by resolute determination coupled with swift and efficient climbing. Whatever the grade of course, both of these qualities are key requisites for successful Scottish winter climbing!