Posted on November 27, 2012 by Simon Richardson 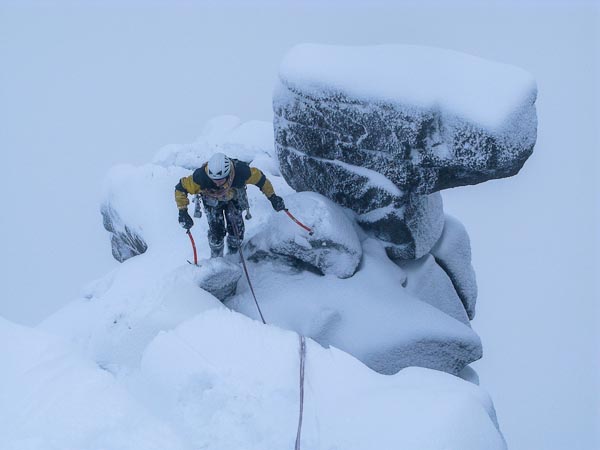 Sandy Simpson moving past ‘the Anvil’ on the first ascent of Anvil Corner (VI,6) on Creagan Cha-no in November 2010. (Archive Photo Simon Richardson)

The recent snow and cooler temperatures are beginning to bring the crags in the Northern Cairngorms into winter condition. Activity is picking up in the Northern Corries where routes that do not rely on frozen turf such as Honeypot, Pot of Gold, The Message and Pygmy Ridge have received ascents.

I’ve just been contacted by Gary Gray who visited Creagan Cha-no today (November 27) and made an ascent of Anvil Corner (VI,6) with Dafydd Morris. His enthusiastic email gives a flavour of the current conditions:

“It was not a great day for climbing with poor visibility and a fair bit of wind, but fortunately we were protected by the route from the worst of it. The turf was not [completely] frozen, but good enough when it mattered. Both pitches were excellent and sustained, so good value for such a short route. The route wasn’t plastered, unlike the crag in general, so gear was plentiful but awkward to place at times. A great route and worthy of a couple of stars at least!”