Posted on November 26, 2012 by Simon Richardson 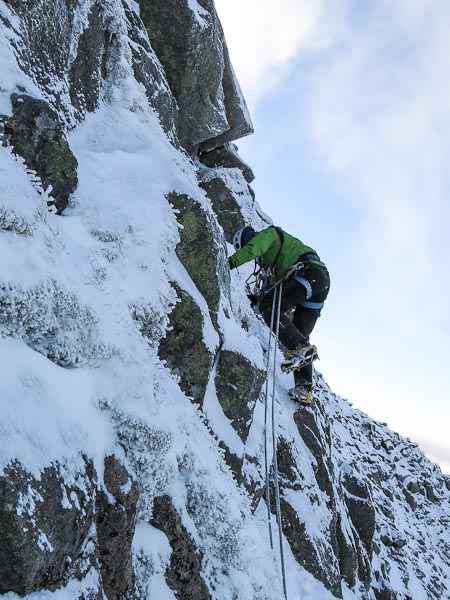 Graham Dudley on the first pitch of Birthday Treat (IV,4) on Braeriach during the first ascent on November 18. This three-pitch route lies in Coire Ruadh on the north side of the mountain and sports a fine third pitch through the upper headwall. (Photo Simon Richardson)

It’s been a testing couple of weeks for winter climbers with a succession of westerly weather systems sweeping across the country. This has brought rapidly fluctuating temperatures with freezing levels rising well above the highest tops. It has also been wintry at times, but the snow has often fallen on unfrozen ground resulting in poor climbing conditions. As a result there has been limited winter climbing on offer, and several folk have devoted their energy to honing their fitness and technical skills at Newtyle and other dry tool venues.

Winter climbing has not been a total write-off however, and the last two weekends have coincided with snowfall followed by brief ridges of high pressure that have cooled things down a little. The trick to climbing in conditions like these is to pick a cliff that is high and exposed to the prevailing wind but has not been buried by too much by snow.

Although a few routes have been climbed in the Northern Corries, they have been sheltered from the prevailing westerlies by the broad mass of the Cairngorms and the lean conditions have not been representative of the higher corries in the massif. Coire Ruadh on Braeriach for example, has provided some good climbing on frozen turf, neve, ice and snow over the last two weekends.

Other climbers have chosen to climb on the West, which has had more snow, but warmer temperatures. Enterprising ascents of note (for the conditions) include North-East Buttress on the Ben, Kid Gloves in the Mamores and Moonshadow on Stob Coire nan Lochan.

All is now set to change with snowfall and cold winds sweeping in from the north. At long last, it looks like the winter proper is about to start!