Posted on November 12, 2012 by Simon Richardson 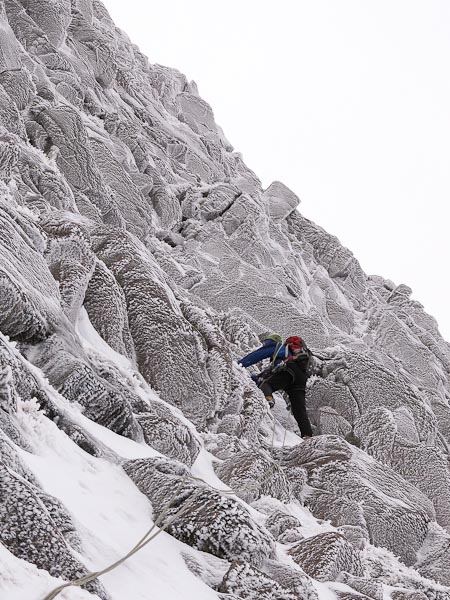 Roger Everett on a new Grade III on Braeriach. Conditions at 1100m in the Cairngorms were excellent on Sunday November 11 with well-frozen turf, hoared up rock and good neve. (Photo Simon Richardson)

After last week’s thaw, most folk were fairly pessimistic about winter climbing this weekend, but with temperatures dropping during Saturday, there was clearly good winter climbing to be had. There were mixed views as to whether to east or west, but one thing was for sure, a high crag was important to ensure a refreeze. I was concerned that the west had thawed more than the east, so Roger Everett and I opted to visit Coire an Lochain on Braeriach on Sunday Nov 11.

The crag up and left on the corrie rim gave an excellent new Grade III on neve, well frozen turf and hoar-encrusted rocks. We descended back around to the west side of the corrie and climbed a short, but good IV,4 on Blade Buttress, the sharp feature dividing Y-Gully in two.

Those venturing further west mainly concentrated on the Ben with ascents of North-East Buttress, Castle Ridge and Glover’s Chimney. The finest ascent of the weekend that has come to light so far, is an early repeat of Dr Noe (VI,6) on Ben Cruachan by Stuart MacFarlane and Gary Gray.