Posted on November 11, 2012 by Simon Richardson 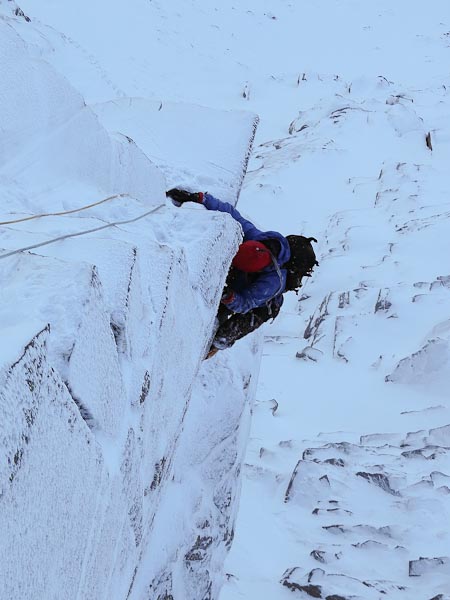 Roger Webb on a new VI,6 in Coire an Lochain on Braeriach. (Photo Simon Richardson)

Catching upon some late news: It was a ‘busy’ morning in the tiny Glen Einich car park last Sunday morning (November 4) with four teams gearing up at 6am for the cycle into Braeriach. Colin Wells and Penny Clay were headed for Sphinx Ridge in Garbh Choire Mor but they were stymied by the large amounts of snow on the plateau. “We stomped over the shoulder to the corrie, totally gobsmacked by the volume of snow and having to make diversions avoiding the incipient windslab that had already built up, “Colin told me afterwards.

“In the gloop we neared the corrie rim and realised that quite large cornices had formed already, so we headed for the spur and shelf on the Angel’s Peak side. Because of having to navigate blind and avoid slab, it had been more time-consuming than usual and was now probably too late in the day anyway to make an enjoyable ascent mostly in daylight. However, just as we grabbed a quick bite to eat before plunging down, the mist rose briefly to reveal – Sphinx Ridge completely buried in a Mr Whippy-style fondant covering from tip to toe, topped by unhelpful cornice. In fact, just about every route was pretty much artexed. It was clear that any climbing was going to involve massive amounts of energetic digging and not be very secure at all, so we decided to cut our losses and bail out…”

Roger Webb and I had more luck in Coire an Lochain. This coire is disappointing from a technical winter climbing point of view, however there is one steep section of rock, which provided a sustained four-pitch VI,6 outing.

I’m not sure where on Braeriach the next two teams were bound, although ascents of West Wall Route and Campion Gully in Coire Bhrochain were reported on UKC, although it is more normal to approach this coire from the Lairig Ghru side.