Posted on November 8, 2012 by Simon Richardson 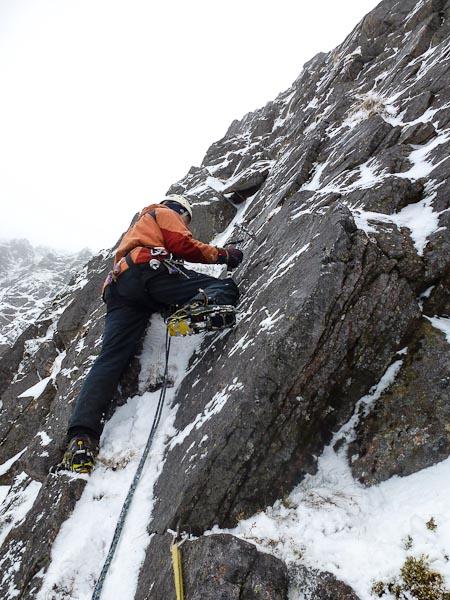 Jonathan Preston on the first ascent of Tsar Wars (IV,5) on Sron na Lairige on Braeriach. The guillotine slab can be seen poised above. (Photo Andy Nisbet)

Andy Nisbet has had a busy start to his winter season with a number of well-known classics in Coire an t-Sneachda, but on Monday November 5 he visited Sron na Lairige with Jonathan Preston and Pat Ingram.

“I was getting bored of Sneachda,” Andy told me, “so I persuaded Pat and Jonathan to take the turf gamble on Sron na Lairige in the Lairig Ghru. I’d often looked at the slabby left face of the buttress with the route Polar Bear up its crest. This always looked rather smooth and unhelpful so had been left as the last of the list of unclimbed lines. The start up lower grooves would have been easy but the turf was hopelessly soggy. Now it was double or quits, roping up to move into the middle of the face in the hope that crucial turf would be frozen. Still unsure, I searched around for as many runners as possible just in case. And of course it was, becoming increasingly frozen the steeper the ground became and just as it was needed.

The crux was a small overlap with remarkable flakes over its top and suddenly the mood became confident. Jonathan led the next pitch over a guillotine slab perched above us. Both he and Pat were very careful but as last man I could pull up on it and stand on it. A final steep flakey section ended with Jonathan clutching a large flake and us telling him that whatever he did, not to let go of it. So he managed to put it back and that was all the difficulties over. Scrambling type ground then led to the plateau and an early finish. Grade IV,5 was a grade easier than we’d expected and the 7.30 start did seem a bit keen (so Pat pointed out; he had driven from Inverness for 7.30). It’s only a provisional name but Tsar Wars sounded funny.”